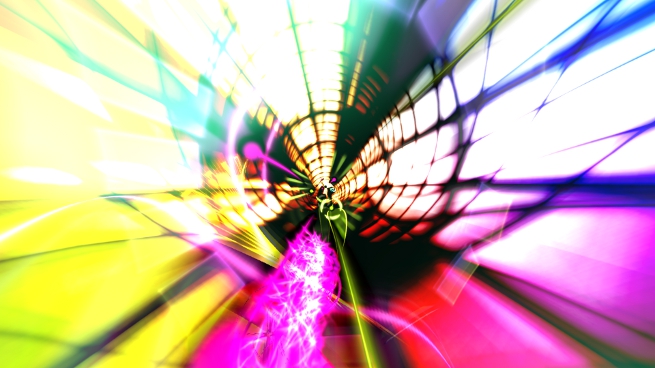 Dyad is fast. Really, really fast. The speed at which it zips along initially reminds me of the exhilaration I’d felt back in 1995, when I fired up PlayStation classic Wipeout for the first time.

Then Dyad gets faster.

This PlayStation 3-exclusive downloadable title is about more than just speed. Wearing its gaming influences proudly on its sleeve, Dyad draws inspiration from sources such as the cult classic Dreamcast shooter Rez and Atari’s 1981 arcade hit Tempest, artfully transcending these roots to create something that is both fresh and blissfully addictive.

Developed by Shawn McGrath (Chain3, iOS) , Dyad is best described as a merging of the racing, puzzle, and shoot-’em-up genres, presented in a stunning psychedelic visual style and accompanied by an off-beat electronica soundtrack (from composer David Kanaga). Controlled using only the left analog stick and two buttons, Dyad puts spins on this simple control scheme to mix up gamestyles across its 26 tunnel-like main levels.

It looks and sounds amazing
Dyad initially presents a fairly basic and clean menu system, and the first few levels of the game are similarly minimalistic. Pretty soon, the combination of colors, speed, and surrounding psychedelia assaulting your eyeballs becomes staggering. The sense of velocity the game creates is incredible, and I think I played a fair few levels without actually pausing to blink, let alone look away.

While Dyad is not a music game per se, the soundtrack is so intrinsically linked to the gameplay and visuals that the three things almost become one. Each level has sound to match its design, and this is further tweaked by your performance, as different actions and interactions subtly alter what you are hearing. The sound really comes into its own on two levels that limit lifeforce; traveling becomes a kind of survival horror experience. As the situation looks more and more bleak, the soundtrack builds to a tremendous crescendo, eventually leaving you with a deafening cacophony of sound to accompany your inevitable demise. 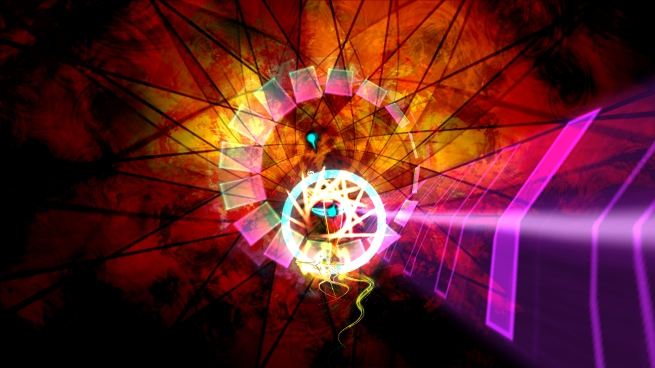 The remix versions of the levels, which become available once you complete the main challenges, allow for further tweaking of the visual and audio properties of Dyad, along with a relaxing of the rules. Turning off collision, turning up visual distortions, and matching sound to speed create something that you can play for relaxation (or to help bend your mind, if you’re inclined that way).

Gradual layering of gameplay
With its basic one-stick, two-button control system, Dyad appears to be a simple tunnel shooter, but it slowly morphs and transforms as it progresses, layering in gameplay mechanics that shift the focus of each level so that every new run feels like a fresh challenge.

It’s testament to Dyad’s constantly and subtly changing rules and mechanics that the game still throws new elements at you on level 22 of 26. It always introduces new features in a controlled manner though, so that the player feels like they’re evolving along with the game, rather than being thrown an unfair and unwelcome curveball every five minutes.

Trophies that are a real challenge
Dyad is not one of those games that gives you a trophy “ding” for simply loading up the title screen. Instead, each level has a separate trophy run that unlocks only after successfully completing the main challenge. Anyone who gains the platinum trophy, which requires you to overcome each individual trophy level, will hold it up as a badge of honor for a long time. 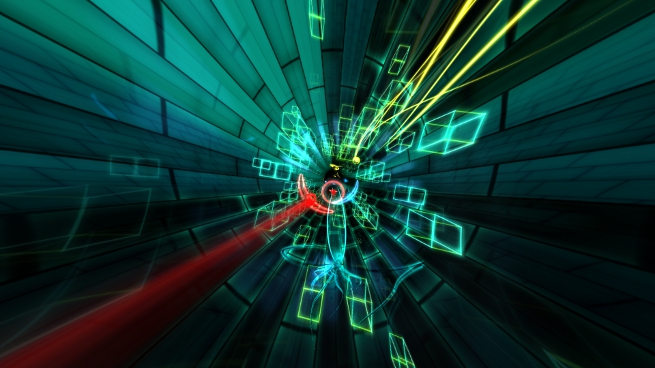 It’s not all that long
Dyad is a gripping and singular experience, something to share just between you, your console, and your TV. Sitting down to play the first level, I didn’t leave my seat until I had completed the game. While this indicates what an all-encompassing draw the game had over me, I was only sat down for three hours, which was long enough to clear all the challenges and pick up my first couple of trophies.

Dyad’s real depth, though, is not in the mere completion of the initial challenges but in the quest for perfection, which is an element missing from a number of current games. The trophy list is a daunting one, and many could take hours of practice before you obtain them. A decent number of friends playing Dyad will also foster some healthy competition on the scoreboards

Dyad is a tease
There were times playing Dyad when I thought I was doing very well. Heck, I even managed to grab the top slot on one the global leaderboards (for fastest time, at 97.75 meters per second). Unfortunately, I wasn’t quite as good as I thought, as the game well knew. Despite offering positive appraisal of my achievements by giving me 2- and 3-star successes on the main levels, Dyad was just building me up for a fall. As I attempted and failed the trophy challenges, I was led to think might be within my abilities. What a tease. 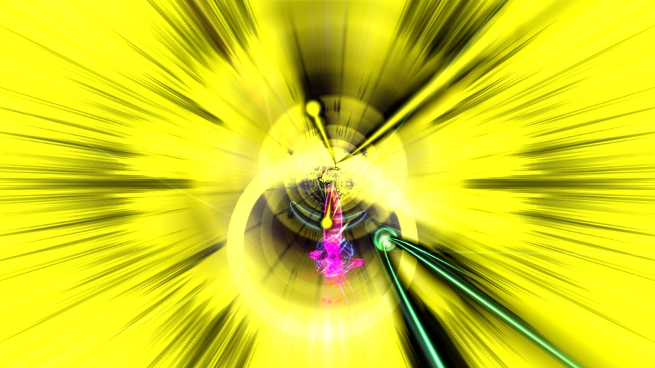 Few console games in recent years are as special as Dyad. It can captivate with its beautiful synthesis of visuals and audio while delivering a gameplay experience that grabs hold of you and simply won’t let go. Drawing on decades of iconic gaming influences, Dyad takes some classic ideas and uses them to produce something truly original, something that deserves to be played and loved for years to come.