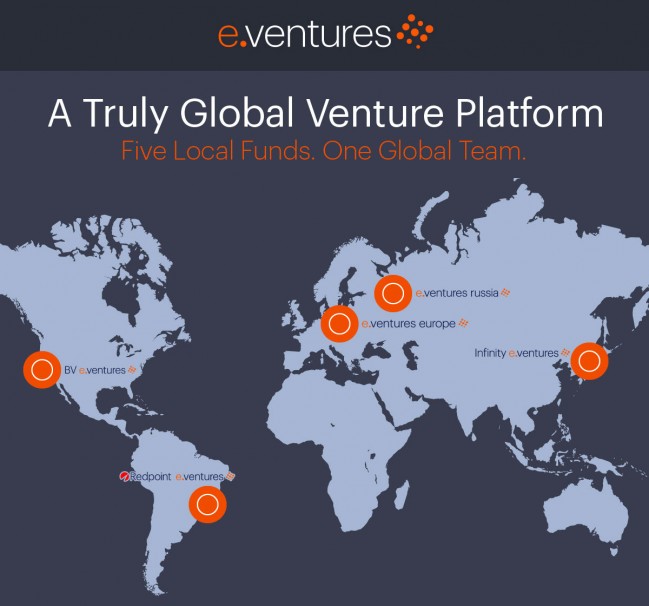 Investment firm BV Capital launched a global venture platform today, unifying its four international funds under one heading and rebranding itself as E.ventures. The integration is in an effort to emphasize the firm’s global perspective and promote international collaboration between the five markets.

E.ventures has dedicated funds in the US, Western Europe, Eastern Europe, Asia, and Brazil, with local investment teams on the ground all over the world. The firm focuses on early-stage startups. With the unification, portfolio companies will be able to access financial and technological resources from all over the world, as well as see increased opportunities for international growth.

“The world has really become flat when it comes to entrepreneurship,” said cofounder Mathias Schilling in an interview with VentureBeat. “Before, China, Brazil, and Russia were standalone markets. With our global platform, it brings incredible synergies and benefits for the funds as well as the entrepreneurs. We can bring our companies to a global scale overnight and effect multi-city partnerships.”

While each market is different, these differences can be leveraged to complement each other. For example, a Russian engineering company may be able to implement its product faster in Brazil’s booming e-commerce scene, or a Chinese gaming company could generate greater revenue by distributing in Japan, where monetization is stronger.

BV Capital has invested in companies such as Groupon, Angie’s List, Shopping.com, and Sonos. Since 1997, it has invested nine funds totaling over $750 million in capital. It is headquartered in San Francisco and has offices in Berlin, Hamburg, Beijing, Tokyo, and most recently, Sao Paulo. Read more on VentureBeat.