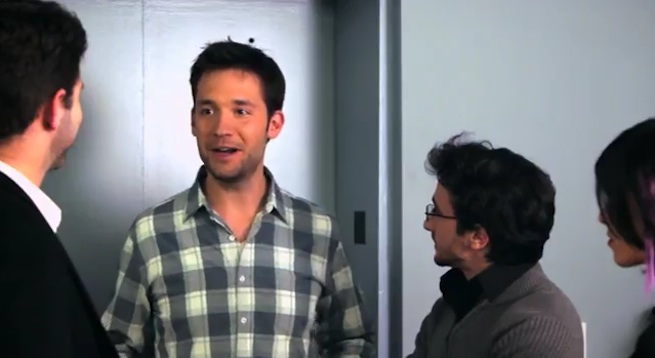 Despite their contributions in making the world more connected, tech entrepreneurs don’t feature much on cable TV programs.

So it’s nice to see premium web series like Leap Year put some of those innovators in the spotlight. The show, which premieres its sitcom-length (18-22 minutes) episodes on Hulu every Monday, is a comedy about five friends running a tech startup called C3D. It has a handful of talented actors, such as Joss Whedon-series regulars Eliza Dushku (Dollhouse, Buffy the Vampire Slayer) and Emma Caulfield, mixed in with cameo appearances by prominent startup founders in the tech industry.

Obviously, the mix of top acting talent and tech industry startup personalities is a recipe for success in the realm of original web content. But with tech founders only making rare appearances in scripted shows, how exactly did Leap Year producers lure them in front of the camera? Well, it certainly helps that the show itself is based around a startup that’s struggling to make a name for itself as a “Skype with holograms” service.

“There’s a certain amount of creative freedom that comes with creating shows for the web,” executive producer Wilson Cleveland told me in an interview about why this mix of tech and acting talent is successful online. “It also offers creators a means to seamlessly interact with the audience.”

Cleveland said he was able to wrangle in tons of founder cameo appearances because he’s already a tech geek submerged in the industry and had already met a lot of them. As for why we aren’t seeing folks like Ohanian on regular TV shows, Cleveland said:

“I think it has to make sense with the storyline and the world you’ve established in your show. Leap Year is a show about the founders of a tech startup, so we ask people known in that community to come do the show and add a little authenticity for the core audience. We make Leap Year for people like Alexis, Rachel, Dave, Reece, and those who aspire to succeed as they have. Having them appear on the show is our way of honoring them and their contributions to entrepreneurship. I think that’s the major difference between Leap Year and some other shows that center on the startup community.”

This season’s episodes are about double the length of last years, which Cleveland said is partially due to its being distributed through sites like Hulu, where the majority of content is longer.

Check out the founder-cameo-packed episode embedded below.