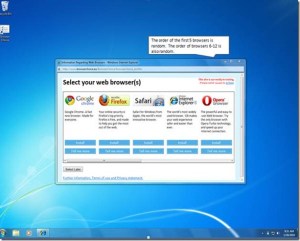 Software giant Microsoft told EU regulators today a “technical error” prevented a mandated browser-choice option being part of its just-updated Windows 7 operating system.  The company apologized to the European Commission and said it would offer the browser choice option for an added 15 months.

Around 28 million PCs were sent the Windows 7 update, Microsoft said. However, 90 percent of Windows users have an earlier version of the operating system, the company said. Hoping to minimize the impact of the error, Microsoft said it issued a fix of the missing browser choice screen within a day after detecting the mistake.

“While we have taken immediate steps to remedy this problem, we deeply regret that this error occurred and we apologise for it,” the company said in a statement. Despite the steps to correct the mistake, the EU has opened a new investigation into the error, saying any penalty could be “severe.”

In 2010, Microsoft  agreed to offer a screen permitting Europeans to choose a browser other than the company’s Internet Explorer. The screen gives Google Chrome, Mozilla Firefox, Apple’s Safari and Opera as IE alternatives. The software company offered EU regulators the browser choice screen as an alternative to entirely stripping IE from Windows.

IE is not as dominant now as in years past. Earlier this year,  Google’s Chrome was ranked in first place worldwide. In Europe, IE and Chrome are fighting for second place to No. 1 Firefox, according to Statcounter. Microsoft’s browser still has plenty of friends, though. The Windows default browser is No. 1 in China, North America and Oceania.