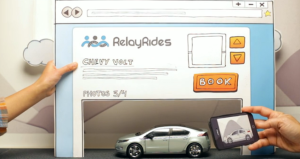 General Motors’ OnStar subscribers, all 6 million of them, can now rent out their cars to RelayRides users for a couple of hours from their smartphone and pocket a few hundred dollars in the process.

RelayRides, a car-sharing service that lets you take complete strangers’ cars for a spin, has hitched its wagon to GM’s communications and assistance program, OnStar, in an effort to reach a national market. This spring, the startup announced it would be expanding its peer-to-peer services beyond San Francisco and Boston.

“Our relationship with GM makes peer-to-peer car sharing the safest and most convenient it has ever been,” Shelby Clark, RelayRides’ founder told me. “We’ve picked up significant steam since our national launch in March — we added more cars in the last month than the entire fleets of both of our competitors combined.”

The partnership is designed to make it easier than ever before to share cars. Renters can safely unlock OnStar-enabled cars via their smartphone or by responding to an SMS, and owners won’t have to hand off keys in person. No kit is required to unlock the car — which puts RelayRides a step ahead of the competition, including Getaround.

RelayRides was the first to take advantage of OnStar’s API, which will be available to third party developers in the late summer.

This announcement also comes in the wake of an additional $3 million in first-round funding, led by none other than General Motors Ventures.