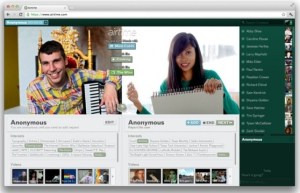 Airtime, Sean Parker’s startup, launched a celebrity-filled promo today to bring in millions of new users to its open video network. The video has been making the rounds, since Internet entrepreneur Shaun Fanning, tweeted about it this morning.

The startup, which promises to be the PG version of chat roulette, launched in June with $33.5 million in funding. The hilarious marketing video, “The best Internet you’ve ever had” features celebrity guests, Kurt Russell and MC Hammer, and is the company’s first real push to win over a broad user base that includes, but is not limited to, tech nerds and early adopters. In short, Airtime needs some ladies.

The video was produced by San Francisco-based studio Portal A, the viral content maker behind the satirical Ed Lee 2 Legit 2 Quit video. The creative studio was introduced to Airtime by investor and friend, Ron Conway.

Zach Blume, a partner at Portal A, told me that the idea was to create a lead character who had it all, except people to talk to. The pretentious robed protagonist, based on the guy from the Old Spice commercials, is played by Ian Plaff — a full-time employee at Portal A, who is described as a creative “jack of all trades.”

Great to see Airtime breaking through using good, old-fashioned self-depricating humor! In the spirit of frivolity, read Sean Ludwig’s piece on Airtime’s launch and strategy to keep penises out of the picture here.