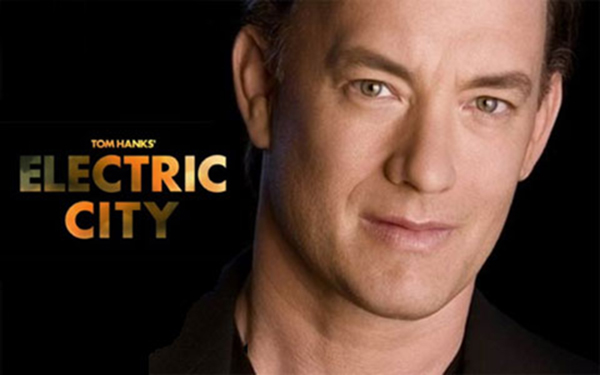 Tom Hanks is probably the last person you think of when I say “video games,” but the famous actor is dipping his toes into the industry with a new iOS and Android app, Electric City: The Revolt, a 99-cent role-playing game. Jump Games is developing the title in collaboration with the Forrest Gump star’s production company, Playtone.

The game comes out simultaneously with the free Electric City mobile app, which allows users to watch episodes of the animated sci-fi adventure series created by and starring Tom Hanks. It’s one more example of what could be an improving relationship between Hollywood and interactive media in the era of social and mobile games. In contrast to big-budget console games, mobile apps are inexpensive ways to extend celebrity brands into new entertainment platforms, reach younger audiences, and stand out among a sea of games.

“We always knew that Electric City was a big, multidimensional story, and that it made sense to present it in a non-traditional way,” said Playtone partner Gary Goetzman in a press release sent to GamesBeat.  “We felt that games and mobile content would be a great way to explore back story and push the parameters of our world.”

Both apps are available now on the iTunes App Store and Google Play.