As promised, AT&T has laid out its shared data plans today, which it’s calling “Mobile Share.” Just like Verizon’s “Share Everything” plans announced last month, the Mobile Share plans will allow AT&T customers to share a single pool of data across 10 mobile devices when they launch in August.

Simplicity is the key to these plans: They all come with unlimited voice minutes and messaging, and it’s not too tough to figure out how much a new device will cost you monthly. Forget about trying to juggle multiple mysterious device contracts.

The base Mobile Share plan starts at $40 a month for 1 gigabyte of data, plus $45 for each smartphone. Adding a tablet will run you $10 a month, while adding a laptop or hotspot will cost $20. And if you absolutely need a feature phone, it’ll cost just $30 a month. Overage fees are just $15 per additional gigabyte of data.

AT&T’s shared data plans go all the way up to $200 a month for 20GB of data (double Verizon’s largest shared plan), and adding a smartphone gets cheaper the more base data you purchase (check out the pricing table below).

What’s clearly different about AT&T’s shared data plans is that they aren’t being forced on you, instead they’ll sit alongside AT&T’s existing plans for new customers. Verizon said that it will eventually remove its prior plans and force new customers to use its shared plans (though currently, new customers can still sign up for non-shared individual plans). 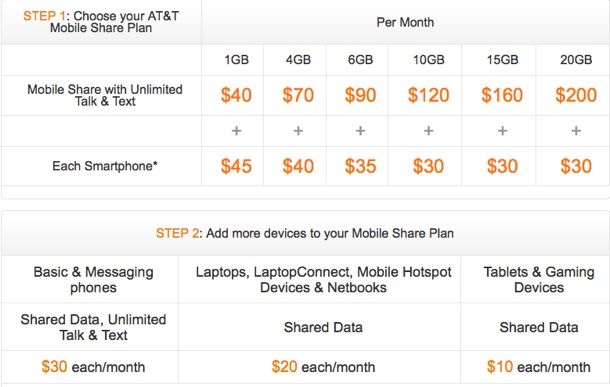