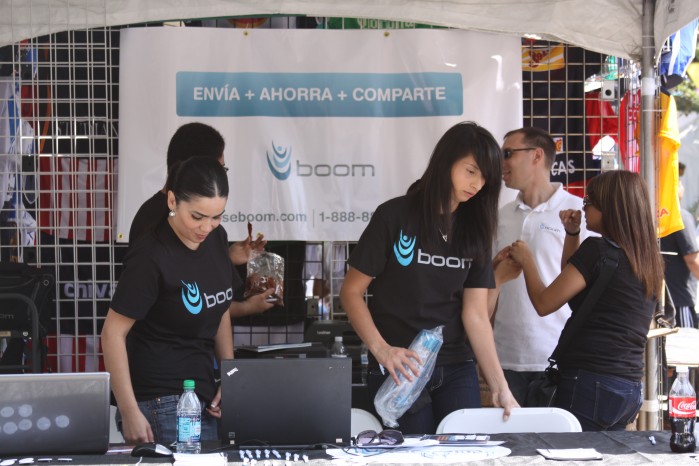 Mobile banking company m-Via has raised $17M in funding and changed its name to Boom Financial.

Boom provides an online financial platform for people without bank accounts. It primarily serves immigrant families and allows them to save, share, and spend their money globally, which is key for those with extended families abroad.

Boom’s mobile money service eliminates the need for traditional cash wire transfers by allowing members to use their phones to make low-cost, bank-grade payments using text messaging. Users can also make purchases and withdrawals at participating Boom vendors and ATMs. They simply load money to their account at participating retail locations, such as 7-Eleven, and then text the amount of money to transfer and the phone number of the recipient. Boom confirms the transaction and wires the funds.

Considering there are over 60 million people in the U.S. who do not have bank accounts but do have mobile phones, there is a huge market for this service. Furthermore, there’s also a strong demand among this segment of the population for a way to send money across borders.

“Boom Financial was founded to provide our customers, who are often used to a feeling of helplessness due to high fees, fear of robbery, and extreme inconvenience, bordering on hardship, gain a feeling of control over their finances,” said CEO Bill Barhydt.

In 2011, Boom (then m-Via) collaborated with the US State Department to create the International Diaspora Engagement Alliance to support diaspora communities in the United States, which underscores the company’s commitment to making life easier for immigrant communities. It raised its initial investment of $5 million in 2010.

This second round brings the total funding to $30 million. It was led by Digicel Group, a value mobile operator with an international presence, including in the Caribbean, Central America, and the South Pacific. Boom Finanical will channel the investment towards expanding its product team in the US, as well as increasing its sales and distribution in the US, Latin American, and Caribbean.

m-Via was founded in 2008 and currently has 30 employees, although it is looking to double the team this year. It is based in Palo Alto.