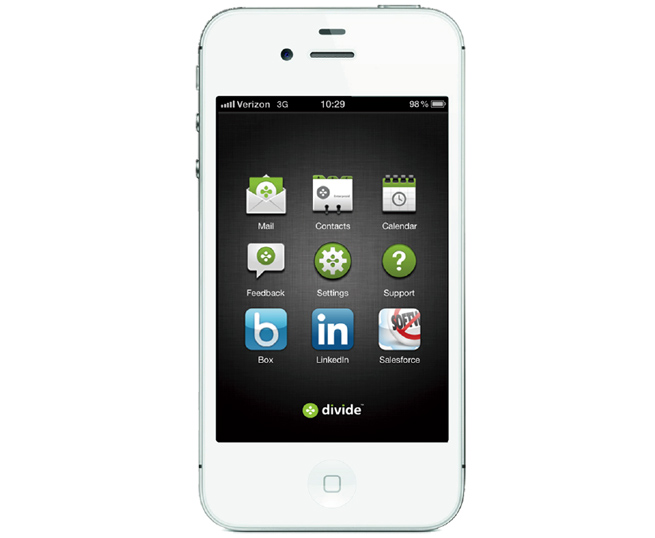 Mobile business software startup Enterproid has brought its ingenious Android-based Divide app for separating your business and personal life to the iPhone, a move that will increase its exposure with the enterprise.

Enterproid’s Divide software has become a popular solution for businesses embracing the bring-your-own-device (BYOD) revolution. The company’s software already allows Android phone owners to have completely separate business and personal profiles on their devices, which means you can keep your incessant Angry Birds action separate from your Box and corporate email accounts. Now iPhone owners will also be able to take part.

“We’ve always said this was coming, but we wanted to make sure what we were building was right,” Enterproid CEO Andrew Toy told VentureBeat. “In our Android development, we found what we wanted, and it was easier to integrate new features. Now we’ve brought that to iOS.”

On the iPhone, the device does not separate profiles as cleanly as on Android. Instead, all of your business apps and data are delegated to a single “container” (it looks like an app) on your home screen. Inside the app, you can access whatever apps your business assigns you — most likely mail, contacts, calendar, and anything else your company depends on (think Salesforce, LinkedIn, Box, etc.).

“When we show this to employees, they respond extremely well,” Toy said. “But this is more about giving employers control they want. The employers know it’s theirs and they like that.”

Toy says the app will “soon” work for the iPad as well, a device that has had a surprising impact on the enterprise. Although the company’s focus is on Android and iOS, he says that after the iPad, Enterproid might pursue Windows Phone 8, Windows 8, and BlackBerry, other platforms that might be worth an investment.

New York-based Enterproid launched at the Demo Spring 2011 and has raised $13 million in funding from investors including Comcast Ventures, Google Ventures, Qualcomm Ventures, Genacast Ventures, and NYC Seed. The 65-employee company also has offices in Hong Kong and London.