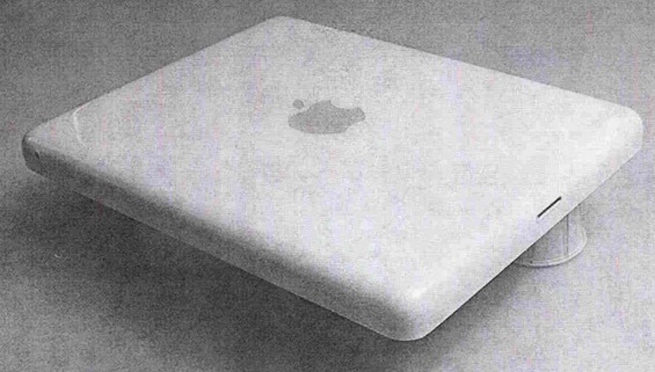 Photos of the earliest known iPad prototype from the early 2000s have hit the web, thanks to some digging by the fine folks at NetworkWorld.

The photos, which have been lifted from Apple and Samsung court documents, show a bulky device that takes design elements from earlier Apple hardware, including the first iPod and the MacBook. The device has similarities to the first publicly released iPad: It has a single port at the bottom, a headphone jack, and a black bezel around the screen. Noticeably different is how thick the prototype is and how it’s missing the iPad’s circular home button.

In a deposition by Samsung, Apple Senior VP Jonathan Ive said the following about this prototype:

My recollection of first seeing it is very hazy, but it was, I’m guessing, sometime between 2002 and 2004. … I remember seeing this and perhaps models similar to this when we were first exploring tablet designs that ultimately became the iPad.

Personally, I can’t imagine this device “making a dent in the universe” like the first iPad did. It appears to be quite heavy, and the specs were likely poor.

Take a look at the photos below and let us know what you think of it: