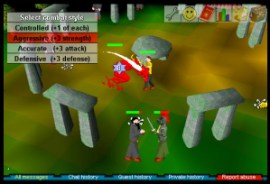 Above: RuneScape as it appeared in 2001 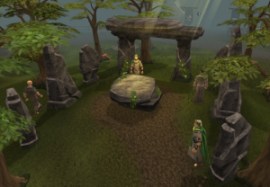 Above: The same location a decade later

Originally released back in 2001, RuneScape has seen other MMOs come and go, but its popularity endures. “Although RuneScape has achieved so much over the past decade, smashing 200 million accounts is a huge accomplishment,” said Mark Gerhard, chief executive officer of developer Jagex, via a press release. “When the game was first released, nobody could ever have expected it would reach such high levels of popularity by community word of mouth.”

Despite being free-to-play, RuneScape offers players the option of purchasing a monthly membership, which provides a host of premium benefits. It also generates revenue through advertisements that appear for non-paying users.

To mark this latest milestone, a three-day celebration is taking place in the game, and a brand-new demon, with 200 million hit points, has been released into the RuneScape universe.

The developers also launched a celebratory microsite featuring an interactive timeline detailing the game’s evolution over the past decade, testimonials from community members, and the slightly mind-boggling infographic you see below.

RuneScape’s players come from 150 different countries and have amassed more than 443 billion minutes of playing time since the game’s launch. For one person to have achieved that, he would have had to start playing in 840,000 B.C.

For more crazy RuneScape stats, take a look at the infographic below.