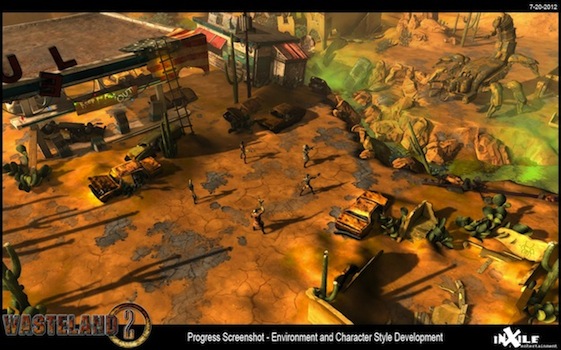 When it comes to game development budgets, $3 million isn’t a whole lot of money. But for the more than 61,000 financial backers who pledged their support for Wasteland 2, inXile Entertainment’s post-apocalyptic role-playing game (RPG), it is. Now those fans are seeing the fruits of their investment with the unveiling of the first screenshot from the game.

Beyond previously released concept art and a 10 page PDF “vision document” outlining plot elements and mechanics for the upcoming RPG, this is our first real look into the stylized world of Wasteland 2. InXile is building it with the Unity game engine, an increasingly popular third-party choice among developers today.

“Releasing a screenshot this early in the process is a new concept for me, as we typically want to hone in [on] every element before we show it,” said Brian Fargo, the CEO of inXile Entertainment, on the Wasteland 2 Kickstarter page. “But based on the requests and our desire for fan input, we are doing so to solicit feedback on the basic look…. Please keep in mind that we have not put in the particle effects and post-processing, which will have a dramatic effect on the scene.”

“In our effort to establish the appropriate look and feel for the re-launch of the Wasteland franchise, we sifted through a variety of media types available on the market for inspiration,” said Koy Vanoteghem, inXile Entertainment’s environment art director. “It became increasingly clear that the modern day conception of a post-apocalyptic world has diversified.”

Though the screen depicts a typical desert setting common to the genre, the developers promise that it’s just one of the many varied environments that we’ll see in the game.

“From the dry deserts and icy mountaintops of Arizona to the coastal conditions of LA and [the] larger southern California region, each region generates its own flavor,” said Vanoteghem.

For more than two decades, Fargo was unsuccessful in securing publisher’s support for a sequel to his beloved Apple II and Commodore 64 game, released in 1988. The original Wasteland was a top-down, turn-based RPG notable for being one of the first games to have players deal with the consequences of their actions, and it later served as the primary inspiration for another post-apocalyptic RPG franchise, Fallout.

After the record-shattering success of Double Fine Production’s funding campaign on Kickstarter earlier this year, however, Fargo turned his attention to the crowd-funding site as the last hope of getting Wasteland 2 off the ground. Luckily, fans responded in droves, and it only took two days for the game to hit its $900,000 funding goal.