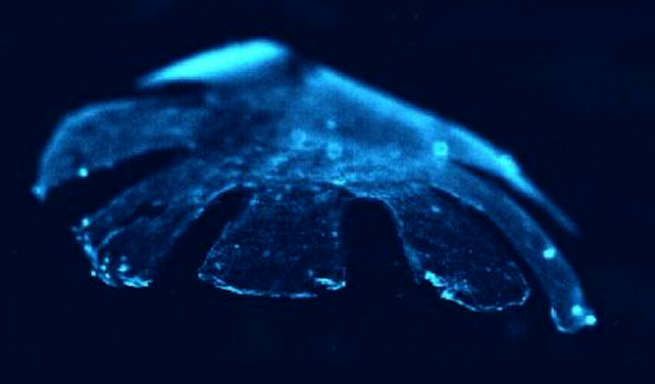 In yet another science-is-awesome moment, a group of Harvard University researchers has engineered an artificial jellyfish from silicone and cells from a rat’s heart.

Harvard bioengineers constructed a freely swimming jellyfish from “chemically dissociated rat tissue and silicone polymer,” as documented by the journal Nature Biotechnology. This research lab mostly focuses its time on creating models of human heart tissues that could be used to regenerate organs. It created the artificial jellyfish to help the team better understand “muscular pumps” by reverse engineering one.

Instead of calling the creature a jellyfish, the Harvard scientists instead refer to it as a “medusoid.” The medusoids were designed using various computer programs so the lifeform would mimic jellyfish behavior, including how it swims, how it feeds, and how it interacts with animal fluids. The team writes:

The constructs, termed ‘medusoids’, were designed with computer simulations and experiments to match key determinants of jellyfish propulsion and feeding performance by quantitatively mimicking structural design, stroke kinematics, and animal-fluid interactions. The combination of the engineering design algorithm with quantitative benchmarks of physiological performance suggests that our strategy is broadly applicable to reverse engineering of muscular organs or simple life forms that pump to survive.

Check out the video below of the artificial jellyfish swimming: