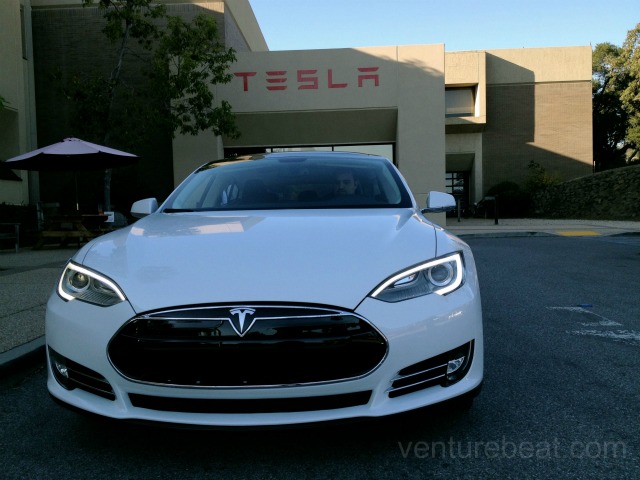 Let’s make one thing clear right up front: I think the 2012 Tesla Model S is the coolest freaking car in the history of Western Civilization.

I put down my $5,000 deposit more than two years ago. I’ve chugged the Tesla Kool-Aid, extra-large size.

But after a 7-minute spin in a dark green Model S last week at the Tesla “Get Amped” test-drive tour stop in Mahwah, New Jersey,  I have to conclude–sadly–that the car is not (yet) perfect.

Yes, the acceleration was mind-boggling, the ride and handling were sublime, the in-dash technology is whiz-bang. But, in my humble (perhaps idiosyncratic) opinion, a few little things just aren’t right.

1.  No “creep” mode. Every automatic-transmission car in the world creeps forward when the driver’s feet are off the gas and brake pedals.  We’ve driven this way all our lives. The Nissan Leaf,  Chevy Volt, and Toyota Prius Plug-In all have built-in creep mode to mimic this effect.

Tesla Motors [NSDQ:TSLA] has inexplicably omitted this feature. A driver-selectable idle-creep mode, with the option to turn it off, would make everybody happy.

2.  It’s hard to get in and out of. I’m 6’2″ and hardly limber, so I’m accustomed to a bit of gymnastics getting in and out of small four-door cars, like my Chevy Volt. But to my surprise, the larger Tesla required virtually the same level of contortion. It’s the price I pay for a low-slung, swoopy, aerodynamic car.

Fortunately, the Model S’s adjustable air suspension can take some of the sting out of the daily in-out routine. There are four ride heights: Normal, Low (for aerodynamic efficiency above 60 mph), High (for snow and rough ground below 20 mph) and Very High (below 5 mph).  The car defaults to Normal and squats automatically above 60 mph.

The high settings are driver-controlled on the center touch screen; if I touch “Very High”  as I pull into my driveway,  the car will silently rise about two inches, thus facilitating a more graceful exit.  It will then stay up on its haunches until I return.

3. Regenerative braking settings are awkward to change.  Like the Volt, the Model S has two settings for regenerative braking: “mild”, to simulate the engine-braking feel of a normal car when you take your foot off the gas; and “strong,” which gives a sharper, sportier deceleration and feeds more power back into the battery.  Strong regen has become a signature of electric-car driving.

To change settings, the Volt driver flicks the floor-mounted shift lever back and forth between D and L.  I quickly learned to integrate the two regen settings into the Volt driving experience. It’s actually kind of fun, like downshifting.

But sadly, the Model S regen control is controlled solely through the central touch screen, a few screens down, which  takes it out of the driving loop.

“It was never meant to be adjusted on the fly,” a Tesla rep told me. Too bad. It should be.

The paragon of regen control is the Volkswagen E-Golf, which features four regeneration settings, controlled by paddle shifters behind the steering wheel. Leave it to the Germans to integrate regenerative braking into the driving experience seamlessly.

4.  Charge port location is inconvenient.  The 2012 Tesla Model S charge port is cleverly hidden under the left taillight lens. Okay, there’s no unsightly charge port door to mar the flawless lines of the car. And yes, it certainly demonstrates that Tesla engineers are clever fellows.

This bloody sacrifice of utility on the altar of beauty calls to mind the original  iMac.  Obsessed with its curvy aesthetic, Apple supplied the first iMacs with a round mouse. Sure, it looked cool. But it proved to be utterly useless;  there was no way to orient it by feel. I bought a standard replacement mouse the next day.

Too bad I won’t be able to do the same with my Tesla charge port. And this is one Tesla can’t change in software, either.

5. Turn-signal lever badly placed.  Three times during my test drive, I attempted to signal a turn and hit the cruise control stalk–which is positioned precisely where the turn lever is on every other car–by mistake. The turn lever itself is inexplicably placed well below it.

Blame this one on Mercedes-Benz. As part of its deal with Daimler, Tesla uses an off-the-shelf Mercedes turn/cruise lever assembly. Mercedes-Benz engineers will tell you that forces drivers to put their hands “where they should be on the wheel.” Great.

Tesla should come up with its own, with the lever positions reversed–or at least rotate the assembly to put the turn signal where it ought to be.

6. No Eco and/or Sport modes.  In some ways, Tesla pulls out all the stops to wring the last smidgin of range out of every kilowatt-hour. (See: retractable door handles.)

Yet it ignores a basic range-stretching strategy used by virtually all other electric and hybrid cars:  different power modes that give varying degrees of throttle response and power output. Max range or max power, take your pick. It just makes sense.

7. State-of-Charge indicator not delineated.  Instead of the vertical-stack bars of the Leaf and Volt, the Model S displays its battery state of charge with a continuous horizontal line. That’s fine, but it lacks any delineation.

In addition to the readout of estimated remaining mileage–always a crapshoot–I’d like to see a simple percentage readout of remaining battery charge. Unlike the mileage “Guess-0-Meter,”  I happen to know how fast and how aggressively I’ll be driving the upcoming miles, and how hilly the terrain will be.

Give me the raw percentage data for battery state of charge and let me have the option of my own mileage estimate.

With all of these quibbles listed, I hold out hope that some can and will be addressed quickly.

Tesla engineers can make changes with lightning speed if they want to: After CEO Elon Musk took a test drive in early June and demanded more robust acceleration, the car was tweaked to his new specs by the time the first production model rolled off the production line two weeks later. The suspension was also reportedly recalibrated at the last minute..

Most of my grumbles can be corrected with software adjustments, which could presumably happen quickly. I’m told there’s already talk of adding an idle-creep mode, along with a hill-holder function.

I also have a long-term fear about the air suspension system, which is a mandatory extra-cost “option” on the first couple of thousand cars.

Air suspensions on other cars have been notoriously unreliable over the long run and hideously expensive to repair. My fears are inflamed every time I drive past a local repair shop, where an old Mercedes-Benz has been resting on its deflated suspension for almost a year.

But you know what really worries me most?  The Tesla factory in Fremont, California, lies just 17 miles from the San Andreas Fault.

I’m hoping the Big One holds off at least until they finish building my car.

David Noland is a Tesla Model S reservation holder and freelancer writer who lives north of New York City. This is his second article for High Gear Media.

This article originally appeared on Green Car Reports, one of VentureBeat’s editorial partners.