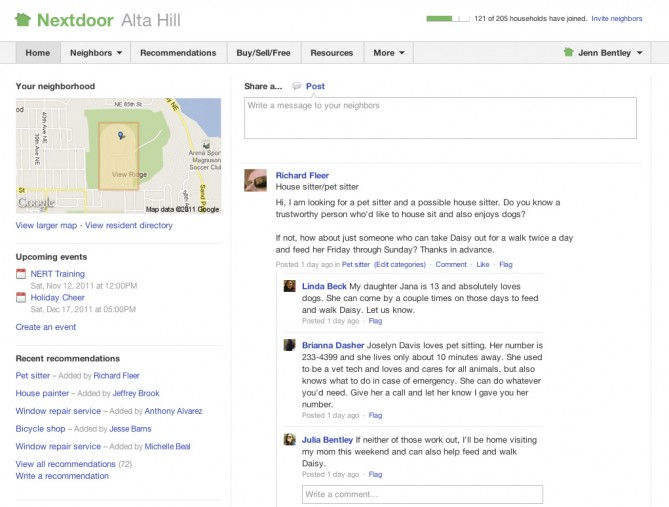 Nextdoor, a private social network for the neighborhood, announced today that it raised $18.6 million in funding.

The site provides a trusted and protected online space for neighbors to engage with each other, with the overarching goal of making communities across America safer and stronger.

Nextdoor is a closed network that members can only join after verifying their home address. Once they have gained access, members can communicate with their neighbors on local issues like crime concerns, public spaces, and babysitting recommendations.

The idea for Nextdoor arose after founder Nirav Tolia learned some startling statistics about the state of the American neighborhood. In an interview, he referenced a poll conducted by the Pew Data Institute in 2010 that found that approximately 30% of Americans do not know a single one of their neighbors by name. He also referenced a book published by Harvard Professor Robert Putnam titled Bowling Alone, which examined the clear benefits of strong communities and the threat weak communities pose to the overall wellbeing of their inhabitants. These two discoveries together inspired him to create Nextdoor.

“Unfortunately, in America we have lost touch with our neighborhoods,” Tolia said in an interview with VentureBeat. “A giant part of our identities is where we live, and while there are plenty of social networks to help us connect with people far and wide, I couldn’t find anything to help us connect to people at our front door.”

The task of creating an online community where people feel comfortable posting sensitive and personal information like their childrens’ schools and details about their homes comes with significant challenges. Tolia listed three issues that were crucial to executing his vision successfully: privacy, user acquisition, and utility.

Privacy may be the most important. In order for real community bonds to be forged, people must have complete faith that they are as secure sharing things online as off. Users must provide proof of residence before they can join Nextdoor. No information on the site will show up in search engines or be visible to anyone outside of the network, not even residents of the same city or school district.

The second challenge was how to create a cohesive community online when it does not exist in the real world. How can you invite neighbors to the network if you don’t know their names, much less email addresses? Tolia addressed this by adopting offline engagement techniques like flyers, postcards, and paper invitations using the good old US Postal Service. Nextdoor pays for all the printing and shipping expenses, and residents are prompted to join by an actual piece of mail that explains the Nextdoor concept and provides sign-up instructions.

Finally, Tolia was adamant that the product is a utility, not a forum for gossip, status updates, or posting photos. Nextdoor is a place to discuss crime and safety, exchange local recommendations, express grievances, and create meaningful dialogue between community members.

So far, 3,600 neighborhoods are on Nextdoor. The company spent an entire year in stealth mode testing out the product in hundreds of communities across America to make sure it appealed to people in all parts of the country, in rural and urban areas, and spanning the breadth of the socioeconomic spectrum. Since its launch last October, Nextdoor has experienced explosive growth and now exists in over 3,600 communities. Twenty-two new neighborhoods are activated every day.

“Everyone lives in a neighborhood and wants it to be stronger,” Tolia said. “Safety is a universal concern. I don’t know too many other internet companies that facilitate safer places to live.”

He embarked on this project after founding a sports startup called FanBase that never got off the ground. Tolia decided to switch gears, take the $11 million he had raised in venture capital, and create a company that would positively impact peoples’ everyday lives.

“The more users communicate using online mechanisms, they more likely they are to communicate in person,” Tolia said. “If you use Nextdoor to get to know your neighbors, you are way more likely to walk outside the door and meet them in person. Ultimately, we are trying to get people to meet in the real world.”

This recent round of funding is the first explicitly invested for Nextdoor and was led by Benchmark Capital, where Tolia served as an Entrepreneur-in-Residence, as well as DAG Ventures, Greylock Partners, and Shasta Ventures. It currently has 30 employees and is based in San Francisco. The money will be used to scale the network, which Tolia believes should (and will) be present in every one of the 20,000 communities across the US.