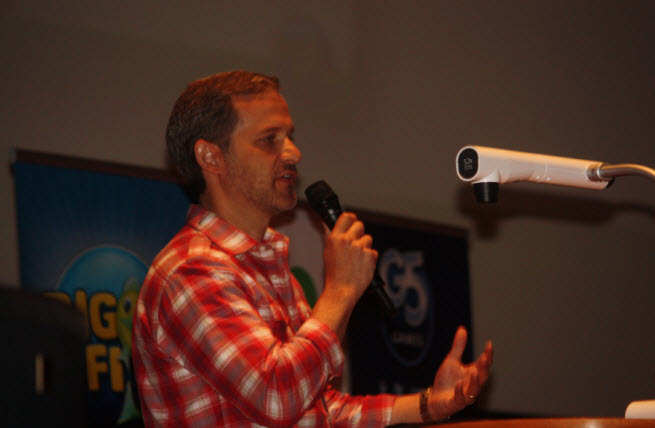 Will O’Brien, the general manager of Big Fish Unlimited, showed off the Grim Tales: The Bride game on the cloud service. The game requires 732 megabytes of storage, but O’Brien was able to begin playing within seconds. He also showed how he could log on with the same account on an Samsung Galaxy tablet and play the same game.

Big Fish will bring 1,000 of its 2,500 casual games to the cloud service, and all of them will start within four seconds, even if they consume multiple gigabytes of storage on a PC. For the most part, developers won’t have to make changes to their source code.

Paul Thelen (pictured at top), the chief executive of Big Fish, said the cloud service will offer all the benefits of cloud computing: the ability to log in from any device, a universal experience across platforms, and the ability to play high-quality casual games across a web connection.

“This technology allows you to play a huge variety of games on multiple platforms,” Thelen said. “It’s the future of games.”

Big Fish Unlimited will also stream to Roku boxes in the fourth quarter of this year, O’Brien said. Big Fish Unlimited will be available for $7.99 a month for a premium catalog of games, with full-screen play and no ads. You can also play for free, with up to 20 games in a rotation. Those games will be ad supported and play in a smaller screen.

At launch, the catalog will start with 100 games from 42 developers. Games from 200 more developers are undergoing testing. Thelen said the team putting together Big Fish Unlimited consists of more than 100 people.