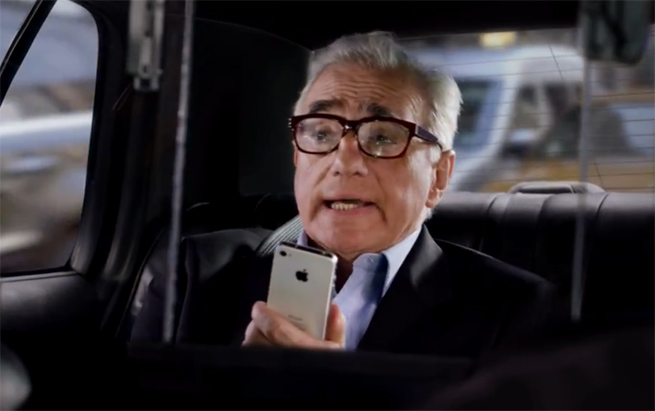 Joining a parade of other notable celebs, acclaimed film director Martin Scorsese appears in the latest ad for the Siri voice assistant featured on the iPhone 4S.

Siri was introduced as an exclusive for Apple’s iPhone 4S, but it will make its way over to the iPad this fall. Since its debut, competitors like Samsung, Google, and even RIM have developed Siri-like voice assistants to help with searches, setting alarms, changing schedules, and more.

The new ad is the latest in a series featuring celebrities being playful with Siri, and previous celebs include Zooey Deschanel, Samuel L. Jackson, and John Malkovich. (My favorite Siri ad featured Santa Claus.) While sitting in the back of a New York City cab, Scorsese asks Siri what his day looks like, to move some appointments, where is his friend Rick is, and how bad traffic is. It ends with Scorsese saying, “I like you Siri, you’re going places.”

Of course, what Scorsese’s ad — like the ones before it — fails to show is how many times Siri doesn’t give you the answer you want or how it can take several seconds to find bits of information.

Watch the full ad below: