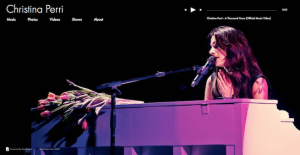 Bandpage, a platform for musicians to connect with fans and promote their music on Facebook, has extended its reach to the broader web. Now, with a new product known as “Bandpage Everywhere,” musicians can build a website and update their Facebook, Tumblr, blog and other promotional sites, in just a few clicks.

“We realized that the next step was to power musicians on both Facebook and the open web,” J Sider, Bandpage’s founder told me in a phone interview. This is the most significant update to the product since the company raised a $16 million funding round in August, 2011.

The real value for bands is that they can manage their online presence in one central hub. Sider told me that musicians (or in most cases, their interns) were spending way too much time refreshing content, such as tour dates, concert photos, and new jams.

As I’m reminded, it’s not always easy to remember a WordPress password when you’re on the road.

In just two years, the San Francisco-based startup has become the platform of choice for musicians to discover new fans. Bandpage counts Jason Mraz, Jimi Hendrix, and Christina Perri (featured) among its star-studded user base, which has swiftly grown to half a million.

Famous faces aside, the majority of Bandpage’s users are struggling indie bands. Bundled into the release is a new tool that makes it easy for musicians to create a personal website. Pop in a background image, and Bandpage will automatically populate the site with a bio, music, and videos from Facebook.

It’s a tool that would come in handy for anyone who relies on digital promotion, bloggers included. Sider told me that Bandpage has come in handy for a broad spectrum of artists and professionals, but the company has no immediate plans to extend its reach beyond its core user base.

“Our focus has always been and will continue to be to help musicians represent themselves,” Sider said.