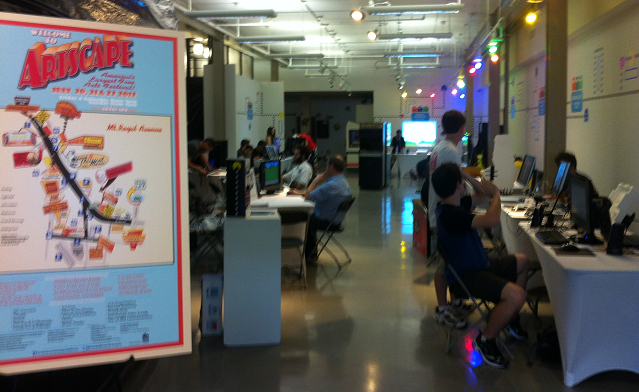 The universe is innately captivating — even my son at the young age of 2-and-a-half marvels at the rocket ship decals, strung-up planets, and stars projected on his ceiling.

Last weekend, I visited Baltimore City’s long running and free Artscape festival that — you guessed it — showcases the passion of the area’s local, burgeoning creative community. This year, I saw the Gamescape exhibit, and within I witnessed a group of talented individuals likewise fascinated with galaxies, black holes, and exploding stars…and all the concepts they represent: the awe of discovery and the expanse of new, unexplored frontiers. In space, anything seems possible.

I walked through the double doors leading into the Bunting Center, a brick building on the Maryland Institute College of Art (MICA) campus. Just inside hustled a small group of local programmers, artists, and students who were setting up widescreen televisions, computers, and other equipment. 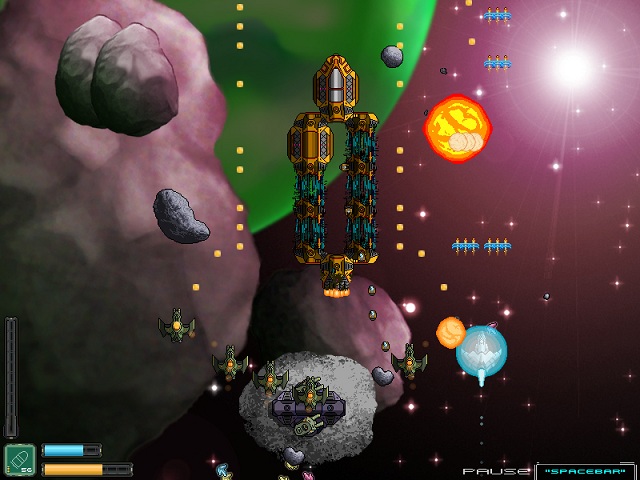 I sat down to an inviting PlayStation 3 controller hooked up to a PC running the game Protostar by indie developer Bitty Bash. “Are you guys showing stuff yet?” I asked. I’d arrived early. Programmer Paolo Munoz responded enthusiastically, “Yes!” Protostar is a Galaga-type, top-down scrolling shooter set in outer space.

As I dodged enemy bullets and returned fire, Munoz explained to me that his kids had inspired him to make a game. At 7 and 4, they were just getting into titles like LittleBigPlanet and Mario Galaxy, and he wanted to create something they could all play together.

Using free tools from the Massachusetts Institute of Technology called Flash Develop, Munoz began building. “You can make a game, too,” with such things, he told me. Initially, his scope for Protostar was small, but that all changed when he brought in Scott Brown to create pixel graphics. Brown would come up with cool and interesting enemy designs, and Munoz then felt compelled to implement them into the game. With Jonathan Stuart rounding out the team as music composer and background artist, they completed a full-fledged title with a lengthy mission-based campaign.

Protostar is particularly traditional, but Munoz didn’t seem to mind. “You don’t have to be original to make something new,” he told me. “You’ll make something from the heart.” Heart was definitely on display, as I saw configurable ship systems (armor, shields, engines, blasters, launchers, and missiles) that function as a sort of self-directed, granular difficulty setting and missions that change when playing through a second time, keeping each experience fresh and encouraging multiple runs. 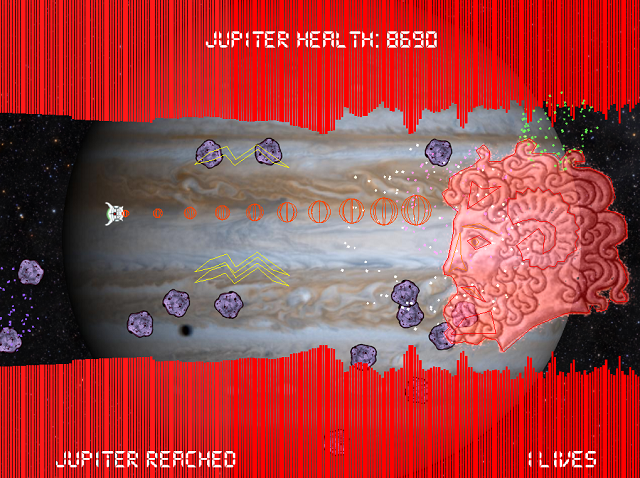 From this first 2D shooter, I made my way to the next, a game called Sinc by indie studio Seven Hills Games. Programmer and designer Greg Aring, who lives just outside the city in the Baltimore suburb of Catonsville, has taken the genre in a different direction by blending music with the standard gameplay and implementing the now common twin-stick shooter control scheme to the side-scroller.

Sinc is set in a post-Earth universe where you take control of the lone human left after an alien invasion of the planet. The twist is that all the world-destroying mayhem happened while you were away on a terraforming mission on Mars. The radio uplink back to Earth no longer transmits a reply. You can spend your time on the red surface looking at rocks, and if that sounds boring, it’s intentional. Aring even considered implementing a mode where you’d watch bacteria cultures grow…in real-time.

The meat of Sinc exists inside a hyper-sleep chamber where you spend most of your time. Since terraforming takes millions of years, it’s the only way to accomplish the job. But in there, your dreams will haunt you in the form of fast-paced shooter action.

Each dream is a journey to another distant planet in the Milky Way, and in your little space explorer, you’ll blast incoming enemies and eventually face a boss encounter. Aring told me that he considered making each level last the same amount of time that light would take to move between each location, but some stages became too long (Mars to Jupiter, for instance, would have been almost a half hour).

The game populates enemies onscreen based on the soundtrack playing in the background, and each trip features rows of digital decibel-level meters on the edges of the screen that shrink and grow with the music. The blend of sound and gameplay creates a captivating experience, and Aring has included a separate mode where you can just play the shooting portion of Sinc. There, you’ll collect “beats” that simultaneously change the pulsating soundtrack and create new challenges.

All of the music in Sinc comes courtesy of Zach Murphy and his band The Wet Dreams, which has a techno vibe that transcends into roaring cacophony as you approach the end of each stage. Boss encounters play to decidedly ominous undertones.