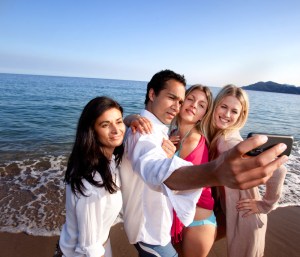 Bump‘s apps are great for tapping two phones together to share contact info and photos. Now, the Bump team is unveiling Flock, a new app for sharing group photos easily and quickly with everyone in said group.

Flock identifies the photos on your phone that were taken together with your family and friends; it then creates a single album in the cloud and shares it with everyone in that set of pics.

The best part is, all you have to do is install the app. Flock does the rest automagically in the background. For a team that emphasizes the so-simple-it’s-stupid nature of its consumer-facing applications, this kind of set-it-and-forget-it functionality is exactly what we’d expect.

For example, when Bump relaunched its mobile app recently, it pared the whole thing down to just the two most popular features. Risky, yes; dead simple, absolutely.

And when the company recently launched phone-to-computer sharing, it made the feature as simple as tapping your phone on your computer’s spacebar. It’s what Bump CEO Dave Lieb called a “cognitively simple” solution in a phone chat with VentureBeat.

When it comes to sharing photos, Lieb said, “What we want to focus on is the really big pain points, and moving photos was the biggest one. People were sick of emailing photos to themselves or trying to find their syncing cable.”

Ditto for group photos. On the company blog this morning, we read:

We designed Flock so you don’t have to think about it at all. You just live your life like you already do. Spend time with your friends and family; take photos with whatever camera app you prefer. There’s no work for you at all, really. Flock uses new battery-friendly location technology and sophisticated algorithms to magically know which of your Facebook friends you are with when photos are taken. After you leave your group hike, or the night out on the town, or Thanksgiving dinner, Flock will check if anyone wants to share the photos they took and then bring those photos together into a single group album for everyone to enjoy. And because most photos taken by iOS devices are geotagged, Flock can even work backwards in time from before you installed the app! So if you and your friends and family install the app today, you’ll likely unlock lost memories that were trapped on each other’s phones for years.

Here’s a video showing off the new app, starring Lieb himself (he’s the bearded dude):

The new Flock app is in the iTunes App Store now; we suspect an Android version is on the way.

Bump was founded in Chicago in 2008 and currently calls Mountain View, Calif., home. The startup has raised $20 million in funding to date.