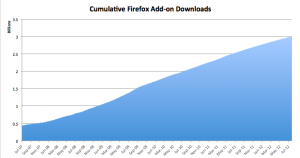 Look at your Firefox browser on your laptop or phone. It’s likely been tweaked-out with the perfect pallete of colors and acts just the way you want. Since those add-ons became available in 2004,  more than 3 billion have been downloaded — more than the entire Internet user base and nearly half of the world’s population —Mozilla announced Thursday.

“More than 85 percent of Firefox users have at least one add-on installed,” Mozilla’s Erica Jostedt wrote. Of those Firefox users who have add-ons installed, most have five customizations. AdBlock Plus is the most popular add-on, followed by Firebug, NoScript, Personas Plus and Video DownloadHelper. Privacy, security and search top the most popular categories of add-ons.

Firefox may be feeling the heat from Google Chrome’s growing competition. However, the free browser isn’t standing still. Along with featuring a major recent update for Android smartphones, it still can claim dominance over Internet Explorer, the previous desktop champion.