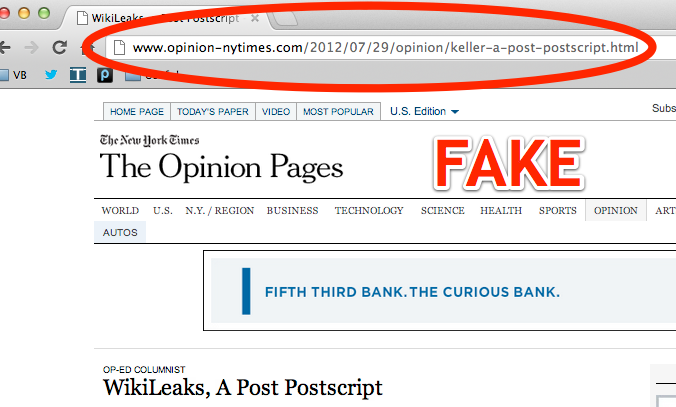 The tweet, which was first sent last night, has since been deleted by Bilton, but the culprit was at least successful in fooling a big mark into giving it legitimacy (not to mention lots of additional retweets).

The fake op-ed piece was intended to be a sequel to a February article by former NYT Executive Editor Bill Keller titled “Wikileaks, A Postscript.” The fake piece is also terribly written and anyone who reads Keller on a semi-regular basis should be able to tell its not up to par. It’s obviously written by another author. Keller has also publicly acknowledged the fake piece on his own Twitter account. If that wasn’t enough to send off red flags, there’s also the absent NYT favicon next to the URL.

Whoever is responsible for the fake article has been planning it for a while, as Twitter user Christopher Soghoian points out. The domain it used was registered March 30 under French registrar Gandi.

Bilton has also released the following screenshot and explanation about his mistake via Flickr: 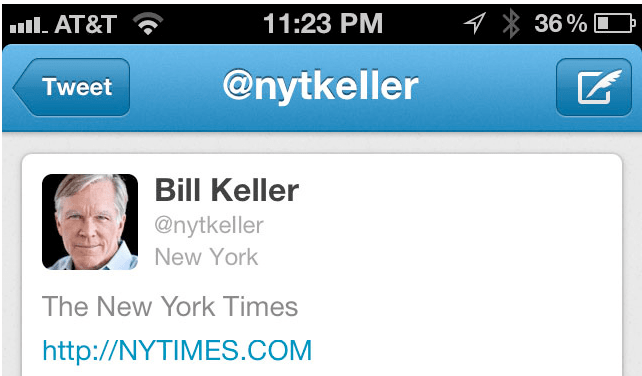 “The account above looks real, right? Bill Keller’s name, photo and URL are all correct. Most importantly, his Twitter handle reads: @nytkeller. Well, it turns out this is actually a fake Twitter account. After suspecting something was off with the account — namely that it didn’t have a little blue “verified” symbol next to it and didn’t show an accurate follower count — I discovered that the two “ll”s in the Twitter handle were actually a capital “i” and lowercase “L.” So in Twitter’s app, it looks like a capital “ll” when in reality it spells his name with an “il.” I notified someone at Twitter late last night (see the timestamp of the screenshot) and asked if this was a Twitter bug, or a fake account and they said they would investigate. It turns out, it was the latter.”

The group also credits its “great supporters,” which makes it unclear if someone else loosely affiliated with Wikileaks was the one actually setting up the site, buying the domains, orchestrating the Twitter accounts, etc.

Yet, it does makes sense for the group to take credit, regardless of how large or little a part it played. The initial NYT piece by Keller wasn’t well received by Wikileaks founder Julian Assange, who said the article painted him in a bad light. This led to a fallout of sorts between Wikileaks and the NYT. That said, the fake Keller article could be viewed as retaliation.