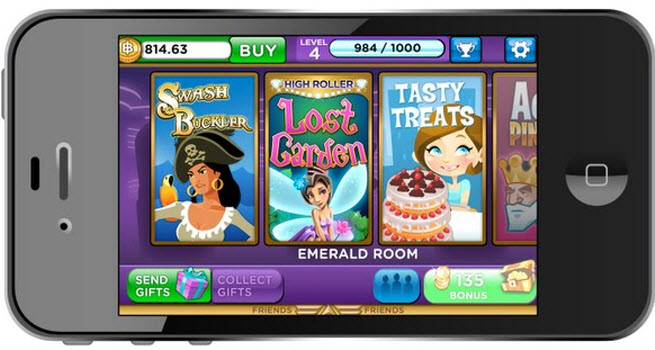 Blitzoo Games, a social-casino-game maker that has succeeded on Facebook, is expanding to the mobile space today with the launch of its SlotSpot casino-game suite on the iPhone.

The Vancouver, Canada-based company is entering a crowded mobile casino game market with big rivals like Zynga and Electronic Arts. But David Bezahler, chief executive of Blitzoo, said in an interview with GamesBeat that his company is putting a new spin on slot-machine titles for smartphones. This type of game has generated an investment boomlet in social-casino experiences, and Blitzoo is banking on the possibility that the phenomenon will spread from Facebook to mobile.

“Mobile is where the growth is,” said Bezahler, who spoke at our recent GamesBeat 2012 conference. “It is where the opportunity and monetization are.”

On Facebook, Blitzoo’s SlotSpot is one of the highest rated and most popular slot games with 1.5 million active monthly players. The game features high-end graphics, fast gameplay, and customized themes. Now the company wants to keep its fans engaged wherever they go. SlotSpot includes 12 slot-inspired minigames with names like Swashbuckler, Reel Romance, Showgirls Classic, and Ragin Cajun. Each has its own characters and distinctive storylines. 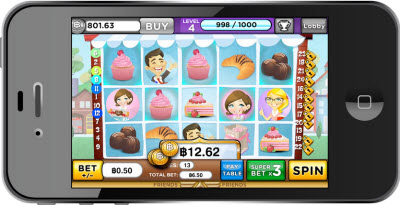 “Today you would need a casino four times the size of the MGM Grand to house all of the people playing our slots at any given moment,” said Bezahler. “We put tremendous effort into nurturing the community around our game, and they’ve been asking us to launch a mobile version of the app, so we are proud to be able to give them a game that we believe will exceed their expectations. This is not simply a reskinned game but a brand new experience built specifically for the iPhone.”

SlotSpot has more than 40 levels. As you accumulate winnings, you can access the new levels and unlock premium rewards such as new minigames, unique bonus modes, additional pay lines, and other added benefits. SlotSpot Adventures are woven through the title where you can go on quests to advance a storyline and witness new plot twists. The social part of the game includes sending coins to friends or competing against them.

Blitzoo was started in 2010 by veteran game executives. It has 26 employees.

“We started with people who had console-game development experience,” Bezahler said.

The company created a Facebook game with a space theme: Planetoid Inc. It took a year to make, but the title didn’t get traction. It also wasn’t designed for monetization. Bezahler said the team left the game on Facebook but stopped supporting it. The developer moved on to create a mass-market offering dubbed Party On. That backyard-party game again didn’t catch on, so Blitzoo scrapped it.

“We decided to find mechanics that were addictive and build a Facebook game around it,” Bezahler said. “We focused on getting an emotional investment by the player in the first 30 seconds of use.” From that came SlotSpot with its addictive casino theme. It took about six weeks to make, and it launched with just a few features.

Bezahler said the evolution of the company is based on a “realistic understanding of the evolution of Facebook.” When the SlotSpot game took off on Facebook, the team breathed its collective sigh of relief. Bezahler said everyone was happy that lots of people were playing the company’s game, and they were offering constructive feedback on a daily basis.

“The reality is that you can still make money in Facebook games, but at its core, Facebook is a better marketing platform than it is a monetization platform,” he said. It’s not exactly what the team set out to do, but Bezahler said, “Success brings its own form of excitement. It’s a truly interesting technical challenge, and we have people competing against each other 24 hours a day.”

Bezahler thinks the social-casino genre has taken off because it fits the demographic of older women on Facebook, and it addresses a “pent-up demand for this kind of easy to play and fun game.”

Rivals in the space include Playtika, Double Down Interactive, and others. Bezahler expects consolidation in the market, and he notes that ads to draw players are getting more expensive.

Blitzoo has raised $5 million in funding, and it plans to raise $5 million to $10 million more.