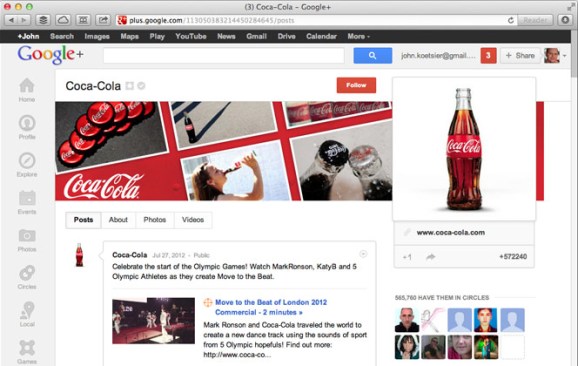 Would you do it just for the ranking? A new study of Facebook, Twitter, and Google+ tracked the ongoing evolution of brands interacting with consumers and concludes that while growing, Google+ is still definitely playing second fiddle to Facebook and Twitter. But with the SEO benefits Google+ can deliver, brands may not care.

The study, by enterprise SEO company BrightEdge, shows that Google+ is catching up to Facebook and Twitter in terms of numbers of top companies on the site, with three quarters of the top brands in the U.S. now on Google+. Which is starting to compare relatively favorably to the number of top brands on Facebook and Twitter: 90 percent and 80 percent, respectively. 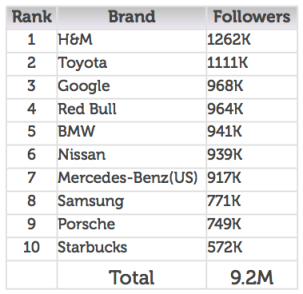 Above: The top 10 brands on Google+

Unfortunately, that silver lining has an enormous grey cloud.

Only 15 million Google+ users have actually circled one of the top 100 brand pages, compared to 481 million on Facebook.

In spite of that, there is one key reason for brands to still care very deeply about Google+: search engine optimization.

Plainly put, the search engine optimization benefits of creating a Google+ brand page are worth the price of admission alone. In other words, whether any fans follow you on Google+ or not, it is worth creating a profile, adding content, and updating it regularly.

BrightEdge tracked top brands at both Google and Facebook. Most followed companies on Google+ include H&M, with 1.3 million followers, Toyota at 1.1 million, and Google itself at just under one million. That compares unfavorably to top brands on Facebook, which include Facebook itself at 70 million, Coca-cola at 45 million, and Disney at 37 million.

But the big win for brands that participate on Google+ is in Google SERPs: search engine result pages.

In other words, when someone searches for Intel on Google, a Google+ page for Intel shows up with the other results. Or, if the company ranks well enough for the right keywords, Intel’s Google+ page could even theoretically show up for a Google search on computer chips. 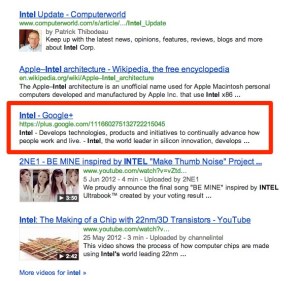 According to BrightEdge, “30% of brands with Google+ pages have these pages show up in search results.” Even more interestingly, that’s a 6-fold increase from February 2012.

Either Google is dialing up a Google+ setting so that Google+ brand pages appear with search engine results pages, or the Google+ pages that brands are creating are getting richer and fuller with content, helping them to naturally rank higher in Google results … or both.

Only Google knows for sure.

One thing that’s obvious, however, is that Google+ has a significant potential advantage over Facebook and Twitter: the company that owns most of global search can ensure that its own social network is represented in search results.

And brands — whether they’re there for the social or the search — are jumping on the Google+ train.