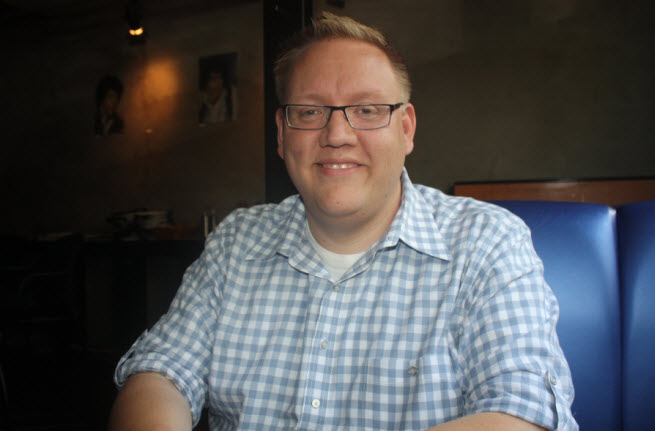 Adam Boyes is the vice president of publisher relations at Sony Computer Entertainment America. His job is to convince developers to publish third-party games on Sony’s PlayStation 3 and PlayStation Vita game machines. Last week, he showed up on a panel at the Casual Connect game conference in Seattle, where he was recruiting casual game developers to Sony’s game platforms.

His presence shows that Sony is embracing the new social, mobile, and online side of the game industry. And that makes sense, considering that Boyes’ predecessor, Rob Dyer, is now the head of third-party publishing at Zynga.

Boyes used to be on the other side of the conversation. He is a 15-year veteran of the game business and former director of production at Capcom USA. He most recently served as president of Beefy Media, a video game production house he founded. He also worked in executive producer roles at Midway on titles like MLB Slugfest: Loaded, NHL Hitz: Pro, and Blitz: The League.

We caught up with Boyes in Seattle. Here’s an edited transcript of our talk.

GamesBeat: I’ve been coming to Casual Connect for a few years, and I’ve never seen a Sony person recruiting developers here — at least not on stage. That’s something new.

Adam Boyes: I’ve been coming here for many years. I don’t know if Sony has because I’m the new guy. I think it’s a new message, too. I’ve been with the company now for three months, and my background is more product development. I’ve worked with developers very closely, both at Capcom and previously. Getting to the roots and talking to the people who are making the content is always a big focus. And then also getting the word out on the fact that developers can publish their own content on the platform, which I don’t think a lot of people understand. Trying to get that word out, too.

GamesBeat: You get a different kind of developer here, too.

GamesBeat: Not the kind that’s traditionally being recruited for console titles.

Boyes: Traditionally, yeah. But if we look at tradition, the traditional publishing model has changed quite a bit, too. Back in the PlayStation 2 days and the PlayStation Portable days, you had to be a full-blown publisher to get your content out to stores. Now we have the PlayStation Network and other digital destinations where people can purchase content.

GamesBeat: Is that a bigger priority, then?

Boyes: I think we see a lot of passion about development in different places, then. We’ve got some free-to-play games on Vita already, with MotorStorm RC and with Montezuma Blitz. We’re making a move into PlayStation Mobile too. I think, in general, getting out to speak with developers, whatever conference it is, is important for the PlayStation ecosystem.

GamesBeat: The one thing that seems like a big difference compared to iOS or Facebook is how frequently your developers can do updates and embrace the analytics model that works so well in social games — where people do their testing, tweak the design, and upload a change via a fast update process.

Boyes: I think we’re pretty open to being able to patch content and add content. As long as it’s data. The challenge is always when it’s an executable; then it’s a full submission. As far as patching small parts of data, we have some partners that patch multiple times through the life cycle. If they’ve installed the right sort of tools and tech on the back end to be able to monitor analytics, then they can patch data on a regular basis.

GamesBeat: That’s been a sticking point in the past with different platforms. Has that been freshly addressed?

Boyes: I think that’s part of the evolution. Originally, we had a different policy on free to play. Now we have free-to-play content and microtransactions. We used to have certain requirements for publishing. Now we have none for developers to publish other content. You have to go through the process of submitting for concept approval, but all of these things are things that have naturally evolved over the console life cycle. We’re evolving more than ever now because the industry is evolving.

GamesBeat: How many digital games are there now? Are you going to dramatically increase that?

GamesBeat: Isn’t there still a distinction between a curated platform and one where it’s published completely freely? Like the iPhone or Android?

Boyes: The PlayStation brand has become synonymous with high-quality content. But our concept approval process is very light in comparison to what it was in the PS one and PlayStation 2 days. Again, because it’s a different type of developer. If you look at Shawn McGrath and Dyad, those are the kinds of games we like. We weren’t able to tell that story 10 years ago on PS2. So it’s cool that we can work directly with developers and allow them the ability to put their content out there.

Boyes: Interesting. For us, PlayStation Plus is a great example of something where people can get a bunch of great pieces of content on a rolling monthly basis. We see that as a big value proposition to gamers out there: to be able to play big, chunky, meaty games. Once you download them within that month, it’s on your system until you delete it. I think that’s a great differentiator for our platform.

GamesBeat: Do you look forward to Sony exploiting Gaikai in some way? Will that help your mission, as well?

Boyes: We haven’t really talked about anything to do with the Gaikai deal. We have cloud saves — we have cloud updates right now — but there’s nothing more to talk about.

Boyes: I think people’s perception of an open platform versus a very closed platform is definitely changing. If you look at back in the Genesis and SNES days, people forget that the PlayStation was the one that came along and allowed people to be a lot more free. I think it’s all come full circle now, as we come upon the sixth year of the PlayStation 3 console and we’re continuing to evolve our policies and improve the openness of the platform. I think we’ve done a great job of evolving policies and the platform and allowing these guys to have a direct path to the consumer.

I’m a big believer in allowing the consumer to have a direct conversation with the developer, so they can have a back-and-forth. What we’ve been doing around Pub Fund is a great example of that with Dyad and Papa & Yo, which is coming soon. And then even on the first party with Journey and Unfinished Swan. I think there are a lot of examples in the Sony ecosystem, both in the first-party and the third-party, where we’ve already been changing and evolving our platform quite a bit.