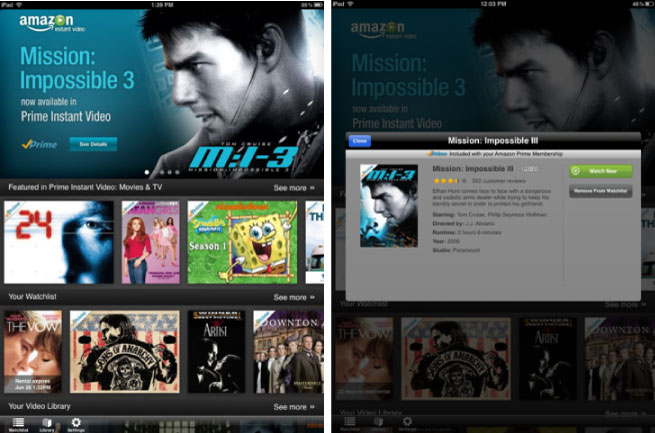 The Prime Instant Video is a complimentary video service offered to members of Amazon Prime, the $79 per year service that provides free two-day shipping to tons of products sold by Amazon. The new Instant Video iPad App represents one of the first big steps by the company to directly compete with streaming video service leader Netflix, which currently has 24 million domestic subscribers.

Netflix has long predicted that Amazon would break the Prime Instant Video service off into a separate service, along with its own monthly subscription fee. Amazon, however, is taking a different route that should make Netflix investors nervous, since the service could eventually steal away Netflix subscribers.

The new Instant Video app basically functions like Netflix’s iPad app in the sense that subscribers can watch streaming videos, add videos to a queue (or Watchlist) for later, Whispersync (bookmarking the last moment you watched of a particular video), and more.

In terms of recommendations for what to watch, Amazon only gives you a small number to choose from. You’re better off visiting Amazon’s website for the full selection, where you can then add titles to your Watchlist. I assume this won’t change because Amazon wants its Prime users to buy products via the website, which might happen while sifting for something to watch.

Yet, Amazon’s iPad app goes a step further than Netflix by providing streaming access to movie and TV shows you’ve purchased or rented through Amazon’s online store. You also have the option to download those video purchases directly to your iPad for viewing offline. For now, Netflix is against the idea of providing movie rentals of new releases through its streaming service.

Don’t get me wrong, Netflix still has a far better streaming service, but Amazon is slowly catching up by adding new features and consistently increasing its content library.