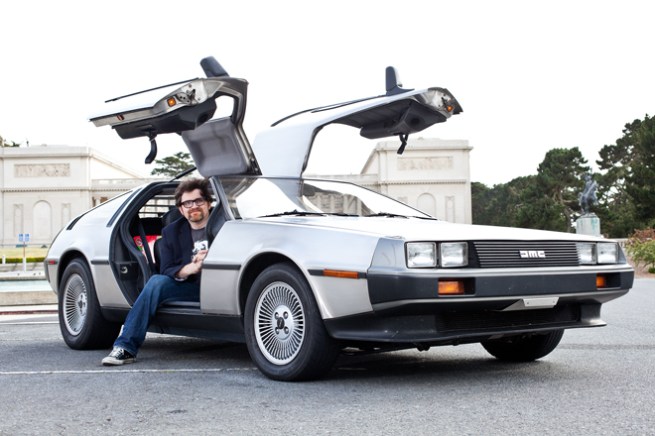 Ernest Cline has a lot to be thankful for. His book, Ready Player One, ranked number 21 on the New York Times best-seller list for hardcover fiction last year, and it slid into the top 20 at the beginning of July this year, a few weeks after the paperback version arrived on shelves. Ready Player One is a success story for more reasons than one. Cline hasn’t been sitting idle, watching his book rise and fall on the charts. He’s transformed it into a platform to share his dream, connect with fans, and launch the marketing campaign of a lifetime.

He’s giving away a 1981 DeLorean to the clever few who can find three keys and open three secret gates — just like in his novel.

“I feel really lucky,” says Cline, realizing that a breakaway hit doesn’t happen to everyone on their first try. “The reception has been pretty astounding.”

Cline celebrated his success by buying a DeLorean of his own, a car he’s wanted since he “first saw one in person at the age of 10.”

He might have written off his purchase as a business expense (“the best idea I’ve ever had,” he says), but the DeLorean means as much to Cline as it does to other ’80s lovers. Ready Player One, which tells a story about legions of dedicated gamers contending for the ultimate fortune, blends classic video game culture with Oingo Boingo songs and movies like Robert Zemeckis’ Back to the Future. To own a real DeLorean like the one in the film, especially a model built from Cline’s favorite pieces of pop culture, might be the geek equivalent of leaving a footprint on the moon. 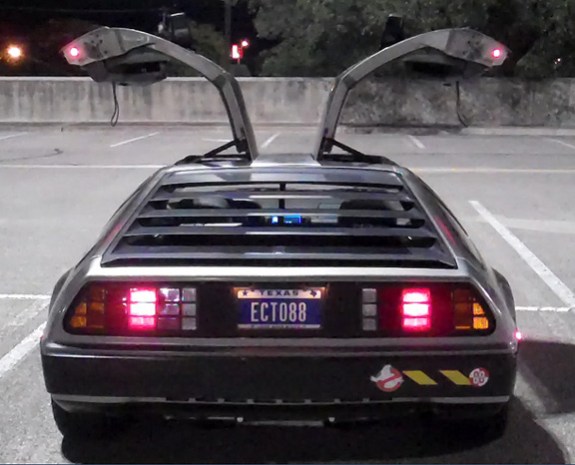 “It’s the perfect emblem of my book,” he says.

“I have modified the car so that it matches the DeLorean driven by the protagonist in my book. I’ve added personalized license plates that read ECTO88. I’ve also outfitted the car with a KITT scanner from Knight Rider, an Oscillation Overthruster from Buckaroo Banzai, a large array of Ghostbusting equipment, and a Flux Capacitor” — the component that gives Back to the Future’s DeLorean the ability to revisit any point in history. “So now it’s a time-traveling, knight-riding, ghostbusting jet car. Probably the geekiest vehicle in history. I love it.”

Cline’s decision to give away a second DeLorean shows a sense of community — a true passion that he wants to share with others and a genuine appreciation for what makes nerds tick. He’s the kind of person who relates most closely with his own character Ogden Morrow, a “fun-loving geek” with a love for ’80s music and video games, along with a few “obsessive” traits.

Cline showcased the grand-prize DeLorean at each of his book-tour signings in Texas, Oklahoma, Colorado, Oregon, Washington, California, Kentucky, and Florida, where people were welcome to view the car in person and even climb inside.

“People at every one of my book signings have freaked out over the car,” he says. “I open it up after every signing and let people sit inside and pose for photos. It’s like a traveling ’80s pop culture museum. People love it, and they love the contest, too. There’s nothing cooler than the possibility of winning a DeLorean time machine by playing video games.”

The contest to win the car consists of three rounds, but participants have to do a little sleuthing to make it to stage one.

“With the help of my publisher, I hid an ‘Easter egg’ in the text of both the hardcover and paperback editions of Ready Player One,” says Cline. “If readers can find this hidden clue, it will lead them to the first of three increasingly difficult video game challenges. The first person to complete all three of these challenges will win the grand prize, a 1981 DeLorean automobile complete with a Flux Capacitor!”

According to Cline’s blog, 931 people have successfully cleared the first gate in the competition. In the book, protagonist Wade “Parzival” Watts — one of many egg hunters, or “gunters,” searching for famed OASIS game creator James Halliday’s Easter egg — conquers the Tomb of Horrors (a reference to Dungeons & Dragons) and acts out John Badham’s 1983 film WarGames line by line to pass the first gate.

The real-world version is a little different.

“The first challenge is the new Atari 2600 game called The Stacks,” says Cline, who notes that the ROM is functional on the Stella emulator and vintage Atari 2600 systems via cartridge thanks to the handiwork of Other Ocean Interactive and AtariAge. “Nearly 1000 people [editor’s note: the number is now slightly higher] have already beaten the game and found the hidden [QR code] inside the game, which leads to the second challenge that launched on July 1, a new Facebook game created by Richard Garriott — the legendary game designer who partially inspired the character of Halliday in the book.” 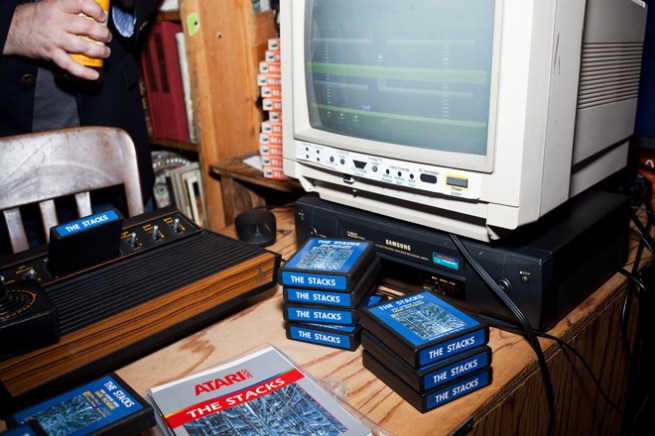 Cline explains that he knew he wanted to host a video game contest that mimicked the one in the book, but he wasn’t sure how to execute the idea.

“Then the hardcover came out in August of 2011, and a lot of real video game developers discovered it and reached out to me, offering to help me create games based on my novel,” he says. “That was when I realized I might actually be able to do a real contest, with the help of these game developers.

“There are three ‘keys,’ or hidden web URLs that lead to each challenge, and three ‘gates,’ or video game challenges that must be completed to proceed. But the challenges are much easier than the ones in the book, and the prize is much more modest than the one Halliday offers. But readers are still having a blast with the contest, and it brings the book to life in a way that’s hard to describe. I’m having a lot of fun with it.”

Five days into the second challenge — concealed in Portalarium’s Facebook game Ultimate Collector: Garage Sale, in which players collect items to transform a regular DeLorean into a time machine — 100 people earned a place in round three. Now the tally is up to 250 players.