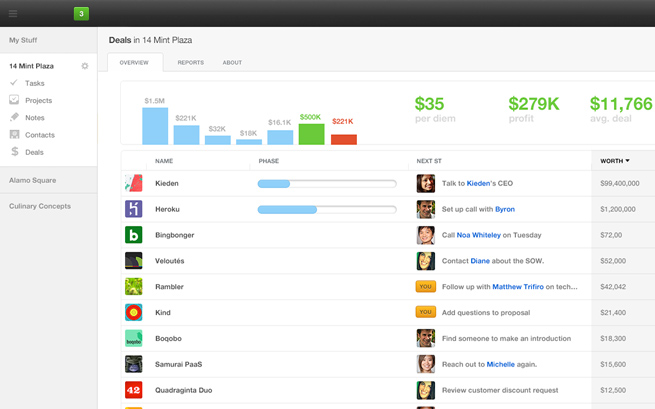 Cloud powerhouse Salesforce has updated its Do.com social productivity application with new features, including a comprehensive contacts form and a tracker for ongoing deals, the company announced today.

Do launched in November 2011 and quickly moved out of beta a month later. The HTML5-based app offers small and medium-sized businesses various tools for getting things done. Until now, you could create and assign tasks, track projects, and take notes in a web browser or on the iPhone.

“There are lots of individual productivity apps out there, but this is the best solution for groups,” Salesforce Senior VP Sean Whiteley told me.

But now Do is adding several new tools to its stable, all of which will be in private beta for less than two months while the Do team works out the kinks. These tools include a contacts sheet, a deal tracker, an Android app, and social integrations with Facebook, Google, Twitter, and Salesforce.

When these private beta features go live for all, Do will move from being a free app to a freemium one. Free users will be able to use the features they have depended on since launch, but extensively using new stuff like “Deals” will cost you. Whiteley said the company will reveal pricing details for the paid launch in “30 to 45 days.”

Whiteley said the team has seen “hundreds of thousands” of signups since the app launched last year and that Do has spent “zero dollars on marketing.”

“Most of our signups have been through people assigning other people to tasks in the app,” Whiteley said.

VentureBeat readers who would like to try out the new beta features of the service can do so by clicking here. The first 1,000 to sign up will be able to give it a spin.

Take a look at some more views of Do.com below:

And check out a video documenting a Do.com customer’s experiences with the app: