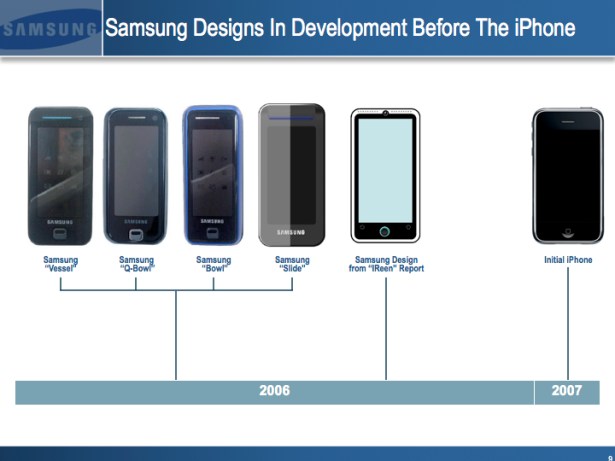 Just how desperate is Samsung in its legal battle against Apple? Enough to make a risky move that could land its lawyers in serious trouble with the court.

After being denied the chance to argue that the design of the iPhone was inspired by Sony, Samsung yesterday sent the rejected evidence off to the media, hoping to prove its point to the public. Unsurprisingly, the move infuriated Judge Lucy Koh, and even though there were no immediate consequences, Samsung could end up paying for its gamble when the trial continues on Friday morning.

Samsung sent along a collection of slides, as well as the following statement to the media (as AllThingsD reports):

The Judge’s exclusion of evidence on independent creation meant that even though Apple was allowed to inaccurately argue to the jury that the F700 was an iPhone copy, Samsung was not allowed to tell the jury the full story and show the pre-iPhone design for that and other phones that were in development at Samsung in 2006, before the iPhone. The excluded evidence would have established beyond doubt that Samsung did not copy the iPhone design. Fundamental fairness requires that the jury decide the case based on all the evidence.

After the news leak, Apple’s lawyers jumped at the chance to call the maneuver contemptible. Judge Koh, meanwhile, demanded an explanation for the source of the news release from Samsung attorney John Quinn.

Samsung’s lawyers were clearly frustrated by being denied the chance to show the evidence, even after multiple motions. At one point, Quinn said he was begging the court to see the evidence, AllThingsD reports.

All of this drama goes to show just how important the “Sony inspired” argument is to Samsung. While Apple is claiming Samsung copied the iPhone and iPad for its devices, Samsung is trying to argue that even Apple was inspired by a competitor.

The slides Samsung released to the press include mock-ups by Apple designer Shin Nishobori, images that we first saw last week in publicly available court documents. But as noted Apple fanboy John Gruber points out, Samsung’s argument is a bit bogus since the design Nishobori created wasn’t an actual Sony phone — instead it was how Apple envisioned a potential Sony phone.

The slides also show a Samsung “IReen” design that was created before the iPhone was released. Samsung would likely be better off trying to prove that it’s been developing an iPhone-like smartphone for some time, rather than trying to prove Apple’s Sony inspiration.

I can understand Judge Koh’s frustration at this point, especially after both Samsung and Apple used their opening statements mainly to tell each other off. Her attempts to get the two companies to settle have failed, and now she’s presiding over a court that’s increasingly looking like a circus.