Chrome, Google’s speedy web browser, eclipsed Microsoft’s Internet Explorer in global market share back in May and is now leading by a significant margin of nearly 2 percent.

StatCounter, a site that (you guessed it!) tallies statistics around web browsers and websites, showed Chrome sliding past IE by a very slim margin a few months ago. Between May 14 and May 20, Chrome was ahead of Internet Explorer for the first time in its brief history (the browser launched publicly September 2008).

At that time, StatCounter showed Chrome having a lead of just three tenths of a percent. Today, Chrome claims 33.81 percent to IE’s 32.04 percent. The situation has changed quite a bit since this time last year, when IE had 42.45 percent of the global browser market and Chrome claimed a mere 22.14 percent.

The stats service moreover showed Chrome passing Firefox in popularity at the end of last year, when it claimed a 25.7 percent share of the global browser market to Firefox’s 25.2 percent share.

Still, StatCounter is just one resource for browser-tracking. Another source is NetMarketShare, which showed that after months of steady losses, Internet Explorer did experience some staunching of the bleeding around the release of IE9, a more modern and competitive browser, and during Microsoft’s concerted campaign to rid people’s PCs of the oft-maligned IE6.

“IE6 has been the punch line of browser jokes for a while, and we’ve been as eager as anyone to see it go away,” wrote Roger Capriotti, Director of Internet Explorer Marketing, at the beginning of the year.

“This is an important step in helping to move the Web forward,” wrote Internet Explorer Senior Director Ryan Gavin at the end of last year. “The Web overall is better — and safer — when more people run the most up-to-date browser.”

But overall, the trends as analyzed by StatCounter don’t favor IE for the long haul. Here’s a chart showing where the major browsers stand and how we got here: 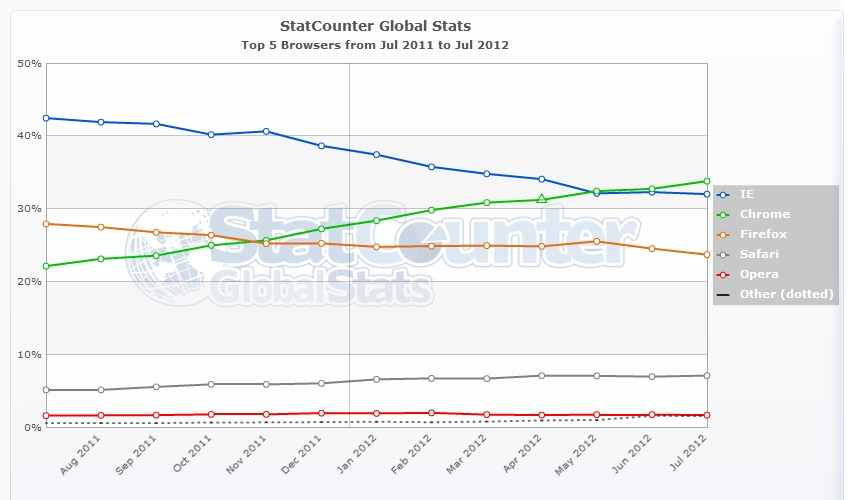