With $33.3 million in funding, Airtime seemed sure to make a big splash. And it did, with a launch event in June that included high-profile celebrities such as Snoop Dogg, Jimmy Fallon, and Julia Louis-Dreyfus. Unfortunately, Parker and Fanning’s latest venture has done almost nothing since then.

Actually, that’s not strictly true. The company put up a blog post on June 6 (its most recent), and in July it released a promo video featuring MC Hammer.

How’s that for return on investment?

Airtime was billed as a way to meet new people through serendipitous video chats. It’s sort of a better-designed, better-funded, and ostensibly less icky version of Chatroulette, the briefly-popular website for chatting with completely random strangers and occasionally viewing their private parts. (Historical side note: Fanning was helping out Chatroulette founder Andrey Ternovskiy in 2010, a year before founding Airtime.)

Airtime keyed in to the addictive zaniness of Chatroulette and positioned itself as a super-fast, browser-based video chat tool. 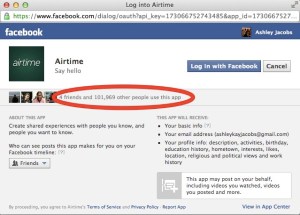 But as of yesterday, only 101,969 people were using Airtime’s Facebook app, according to the information that Facebook publishes (see screenshot). Since it’s only available through Facebook, that means this is the entire user population for Airtime. It also means investors have poured $330 into the startup for every user it’s managed to acquire in its first two months.

I asked Airtime to clarify the user numbers, and a company spokesman told me, “We’re not commenting on anything right now.”

Despite the bad news, or perhaps because of it, people on private-market trading tool SecondMarket seem quite interested in Airtime. It had the largest quarterly increase in total “watchers” on SecondMarket, which means rapid growth in people who are following the company, possibly with an eye towards buying shares on the private market.

To be fair, Airtime as a company is only about a year old, and it’s only been two months since the launch. The user experience, when it worked, was pretty good: VentureBeat’s Devindra Hardawar praised Airtime for helping him make “a legitimately good connection that I wouldn’t have made otherwise.” So it has potential as a tool for finding new friends, in addition to chatting with your existing friends.

And it was clear from the string of errors during the launch event that Airtime wasn’t a fully-cooked product. The team is probably busy fixing holes in the code, nailing down the security, and making sure that it’s a more reliable experience. You shouldn’t expect them to spend money on marketing or user acquisition until the product itself is ready.

But if it wasn’t ready, you might ask why the team even bothered to launch.

If there’s one silver lining to Airtime’s slow start, it’s that the company doesn’t have millions of disgruntled users, so if it needs to pivot, it can do so without worrying much about an existing customer base.

The company needs to get on the ball, and soon. And when it does, may we suggest spending your money on engineers instead of comedians?