Facebook’s mobile risk has turned into an opportunity for application developers. Today, the social network has unveiled a mobile ad unit designed specifically for application makers looking to promote their creations to the 543 million people who access Facebook on mobile each month. 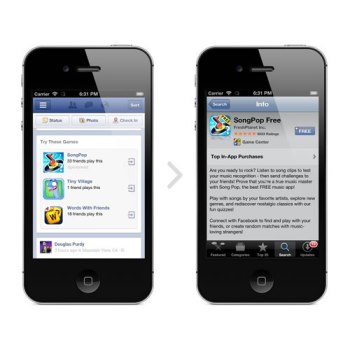 Still currently in testing, the units are called “mobile ads for apps,” and they allow application makers to buy prominent exposure for their apps in the mobile News Feed.

The promoted applications appear alongside organically surfaced app recommendations in a suggested applications box. A click directs people to Google Play or the Apple App Store for download. The units run on a CPC model, so app developers can set a daily budget and bid for clicks through to Apple’s App Store or Google Play. App makers can also specify ad targeting preferences such as region, gender, and age.

Once the new unit is more widely released, it can help Facebook tackle its stock-crumbling problems; shares closed down Tuesday at $20.72. For starters, mobile ads for apps make Facebook far less constrained on the mobile ad front.

The company, which can pretty much only place ads in the mobile News Feed, now has a mobile ad unit that looks nothing like a Sponsored Story — or an ad, for that matter. In fact, the units, sandwiched next to suggested apps, are partially disguised as app recommendations, which means users might not process them like ads and may be more open to seeing them more frequently than Sponsored Stories.

The net effect may be that Facebook can serve double or triple the number of ads it shows to each mobile user, and that’s a pretty big deal. In the theory, the social network could jump from making roughly $500,000 a day from mobile ads to making $1 million a day or more by the end of the third quarter. While the additional mobile revenue won’t be enough to magically return the company to a valuation of $100 billion or more, it should provide investors with some proof that Facebook can still make a buck or two from members that skip the web version.