The most successful crowdfunded project ever continues to gain steam and announce partnerships.

The creators of Ouya, the Android-based gaming console that has now raised almost $7 million on Kickstarter, announced today that open-source media player and digital entertainment hub XBMC will be integrated into the platform. In addition, the creators of Ouya are working with TuneIn to bring Internet radio — 70,000 stations worth — to the new console platform.

In a blog post on the organization’s Kickstarter page, Ouya calls the addition of the XBMC’s media center “a match made in open-source heaven.”

According to the XBMC announcement, this is not just a quick paste-on addition but a cooperative effort: “XBMC will be working with Ouya to ensure that XBMC works well on the Ouya platform.” 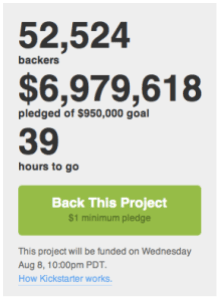 Above: Almost $7 million raised so far …

The announcements come just days after Ouya announced iHeartRadio was bringing over 1,000 U.S.-based radio stations to Ouya, and that the newest home entertainment center was partnering with music-video platform VEVO to add high-def music videos.

In other words, Ouya is shaping up, on the surface at least, to be a viable competitor in a mature marketplace that includes smart TVs, Xbox, PlayStation, and AppleTV: media hubs and content access points bringing everything that the Internet offers to the biggest screen in your house.

(See interviews with Ouya’s designer, Yves Behar, on stage at GamesBeat, as well as one-on-one with our own Kat Bailey.)

Ouya started with games — and recently brought streaming games platform OnLive to the platform —  but the vision always included more.

“It’s a new kind of game console for the TV that embraces the openness of mobile and Internet platforms,” Julie Uhrman, the founder and chief executive of the company, said just as the project was getting started on Kickstarter.

That statement is proving true now, as Ouya is building a strong stable of partnerships and services to deliver a full-featured media experience.

Once question: Will the end result feel simple, clean, and integrated…or will the conglomeration of different services and interfaces feel artificial and pasted together?

Only time will tell.

Above: Tune-in interface on Android