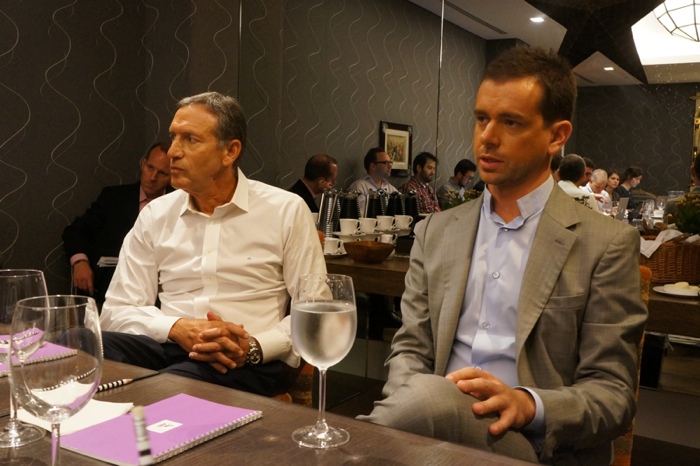 Last night’s announced partnership between Square and Starbucks came as a surprise, but after hearing chief executives Jack Dorsey and Howard Schultz discuss how the arrangement came to be, it seems like one of the most logical unions between tech and business in recent memory.

The pair spoke with a small group of journalists at a New York City hotel this morning, clearly anticipating that we’d have many pressing questions after last night’s news.

Schultz kicked off the conversation, saying that he hopes to do two things with the Square partnership: enhance the Starbucks customer experience, and also shine a light on Square. As part of the deal, Starbucks will invest $25 million in Square’s next round and Schultz will join Square’s board. At this point, he already sounds like a believer in Square’s potential to change business forever.

Starbucks has already seen massive success with its mobile app, which has processed more than 60 million transactions (more than 1 million a week) since its debut a year ago. That success made Starbucks the target of businesses hoping to jump into mobile payments.

“As a result of the high degree of attachment around mobile payments at Starbucks, over the past six months or so, we’ve literally been contacted by most of the high-profile tech companies who have been chasing ways to monetize mobile payments and payments in general,” Schultz said. Starbucks ended up meeting with all of those potential partners, but the company’s head of digital strategy Adam Brotman eventually directed Schultz to Square.

Schultz said he contacted Jack Dorsey to get a handle on Square:  “Once Jack and I sat down, it was very obvious to me, that the technology, innovation and the lens they were looking at this was highly compatible to the future state of payments in general, and was a natural opportunity for us to create this partnership.”

Dorsey echoed Schultz’s excitement. “This is definitely an epic partnership — certainly for Square — but I think for both companies… it has a definite positive impact on the world,” Dorsey said.

The Square CEO said he has admired by how Starbucks has always been highly focused on customer experience: it’s not just about shilling coffee. He said he appreciated how Starbucks also paid attention to how drinks are served, as well as the experience of entering and leaving a store.

The pair proceeded to have a fairly free-wheeling conversation with the press. Here’s a collection of the best bits: