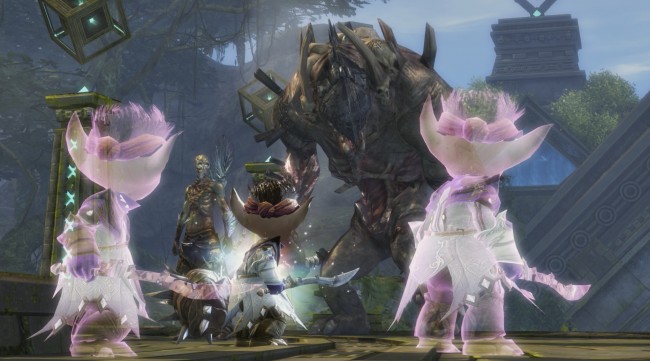 Guild Wars 2, the much-anticipated PC MMO, draws ever closer to its August 28 release. GamesBeat sat down with ArenaNet content designer Mike Zadorojny to discuss the final days before launch, console ports of MMOs, and the future of MMO subscription models. You can also check out our previous interview with studio president Mike O’Brien on Guild Wars 2’s approach to monetization.

GamesBeat: Can you give us an idea of what the development team does in the final weeks leading to launch on Guild Wars 2?

Mike Zadorojny: Right now, most of my team is playing the game. We spent all this time building it, and now we’re making sure that it’s pitched right and polished. We do these daily play sessions where we’ll pick a dungeon on a map and we’ll spend a couple of hours in the dungeon playing through in groups and going through the content. We give feedback to the dungeon guys. And for the rest of the day, we spend it playing one of these maps. We go through, and we look for things that are broken, things that don’t feel right, things that players might run into problems with. And we continue to give feedback to each other. We’re trying to make sure that this game is going to be the best possible thing that can it be when we launch it. We’re just spending a lot of time in the game. Playing it. Looking at balance. Making sure the events are working. Things like that.

GamesBeat: What does someone like a concept artist do at this point during development? Where do you put staff members that don’t necessarily have an ongoing responsibility right now?

Zadorojny: Well, it’s the same thing. They’re helping us make sure that the game is accessible to anybody. There are some projects that we’re already looking toward postlaunch, too. We know we’re going to be working on live content. We have a live team already getting situated. So some of those guys are already looking at that. But at the same time, they’re also helping us make sure the game is polished.

GamesBeat: For quite a few years now, even as far back as the PlayStation 2 and the original Xbox, a lot of major PC MMOs have promised a console version. But only a couple have actually delivered. From your perspective, why you think that keeps happening?

Zadorojny: Console is a hard thing to do. You wind up in situations where, whenever you’re doing an update…with an MMO, we need to be really flexible. If there’s a common game-breaking bug, something like that, we need to be able to patch the game relatively quickly. When you work on consoles, you start having to deal with publishers and having to go through checks and balances with them as far as making sure they’re okay with the executable that you’re pushing up. And there are costs associated with it as well. It’s much easier to reflexively adapt to situations on the PC than it is with console.

GamesBeat: With that said, because that does seem to be a pretty common answer from Blizzard and everyone else, as far as why games like that can’t be done, what would you like to see from the next generation of consoles in order to better facilitate the types of games ArenaNet makes?

Zadorojny: It’s going to come down to relationships. It’s going to come down to everyone realizing that we’re on the same team here, and when we’re trying to push things out through a console development, the publisher needs to be able to work with us. NCSoft has been fantastic with us as far as everything we’ve needed to do. They’ve given us the creative direction to take the game wherever we want. We need to be able to build working relationships like that with other publishers.

GamesBeat: Would you ever consider a watered-down, streamlined version of one of your IPs to accommodate the limitations of consoles? Such as something along the lines of what Nexon did with Dungeon Fighter?

NCsoft PR: You know, we’re looking at different things and different opportunities to get out there. We really have nothing to discuss on that score at this time. Right now, as a publisher, we’re focused on…. Over in Korea we just launched Blade & Soul. We’re focused on owning that and making that the best PC gaming experience over in Korea. Over here we’re focused on Guild Wars 2 and making it the best PC game available right now. There’s always talk about a variety of other avenues and platforms to explore. But right now our main focus is pushing Guild Wars 2 out to be the best PC game available.

Zadorojny: From the developer side, I don’t know that we would ever want to do a “watered-down version” of something. For us it’s always about pushing the boundaries and being able to create something that can stand the test of time. We want to make sure we put our full effort into something.

GamesBeat: Did anything about Microsoft Surface or SmartGlass intrigue you in regard to what the future may hold for what you can do with your games or MMOs in general?

Zadorojny: Well, I think technology in general…the rate at which it’s been iterated upon more recently has been exciting to watch. Obviously, we’re always looking at new opportunities and things that we can do, but we don’t really know what that is or where that’s going to take us yet.

GamesBeat: A lot of major MMOs still attempt to come out at full price and then stack a monthly subscription on top of it. Inevitably, they go free-to-play after a lackluster launch. Do you think either freemium titles or models like Guild Wars’ one-time purchase with a subscription should become the standard for MMOs in general?

Zadorojny: Well, I don’t know if there is any standard for games. You need to look, when you’re developing a game and you’re creating something, at what works for that game. For us, this was the model that we wanted, and it matches well with our design philosophy. It matches with how we want to take our mission forward. But I don’t know, necessarily, that I can say that this is what every company out there should do.

GamesBeat: The Asura and the Sylvari races, arguably two of the most interesting in the game, seemed like they were mostly kept a secret and locked out of the betas up until the very last minute. Was that for any particular reason?

Zadorojny: The content was ready to go at that point. A lot of the stuff that we do is based on what is ready, what we think is polished, and what we can show. We’ve always been working on those guys behind the scenes. The various maps just weren’t where we wanted them to be to show to players yet.

GamesBeat: These seem like two pretty big things to not have where you want them so close to launch. Would you say now that version 1.0 of Guild Wars 2 is exactly where you want it to be?

Zadorojny: Well, we’re perfectionists. We always want to keep pushing the boundaries. You give us another week and we’ll keep working with that, but then we’ll ask for something more. We are where our content, when we launch Guild Wars 2 on day one, it’s going to be a playable, successful experience and enjoyable for players who get their hands on the game. It wasn’t a matter of being concerned that it wasn’t ready to show. It was more like…our internal quality bar, where we want things to be, it just wasn’t ready for that time frame.

GamesBeat: A couple of major titles, like the Battlefield series and, infamously, Diablo III, have had some pretty substantial launch issues. These are games that have been in development for years, they have some of the biggest companies behind them, and things still went wrong. How does ArenaNet work to ensure that everything does work when the switch is finally flipped on?

Zadorojny: There’s a lot of testing going on with the game. We’ve already done various stress tests. The beta weekend events have really helped us get numbers of players in to help test the hardware. Our iteration time is extremely low. We were running through 20 or 30 builds in any given day. So if there’s a problem we can adapt really quickly and get a fix out in, say, 5 to 15 minutes, postlaunch. It’s about being agile. It’s about making sure that you have the right people ready at the right time in case something does blow up.

Guild Wars 2 launches on August 28 for Windows PC. Players can preorder their copy of the game now to start three days earlier than everyone else. NCsoft has also released a promotional video of geek personality Felicia Day opening (or at least, trying to) the Guild Wars 2 Collector’s Edition.