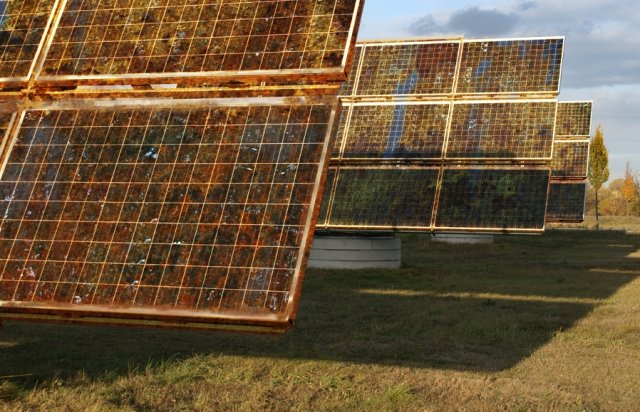 Researchers at UC Berkeley have discovered that what looks like junk may actually open the doors to a treasure of solar energy.

Using an electric field, semiconductors such as metal oxides (as you can see above, this amounts to rust) can be made usable for solar panels. The electric field gives the materials the high-quality p-n junctions (the electro-chemical building blocks of solar panels) they need to capture energy from the sun’s rays.

Creating the p-n junctions needed is a process called doping. The Berkeley researchers’ paper is called Screening-engineered Field-effect Solar Cells, and it states that any semiconductive material, including cheap metal oxides, sulfides, and phosphides, can be successfully doped using an electric field.

For example, cuprous oxide (Cu2O) is, the paper says, “a highly abundant but hard-to-dope semiconductor. … We have demonstrated a 60% relative efficiency increase with Cu2O.”

“It’s time we put bad materials to good use,” said physicist Alex Zettl one of the researchers who produced the paper.

“Our technology allows us to sidestep the difficulty in chemically tailoring many earth abundant, non-toxic semiconductors and instead tailor these materials simply by applying an electric field.”