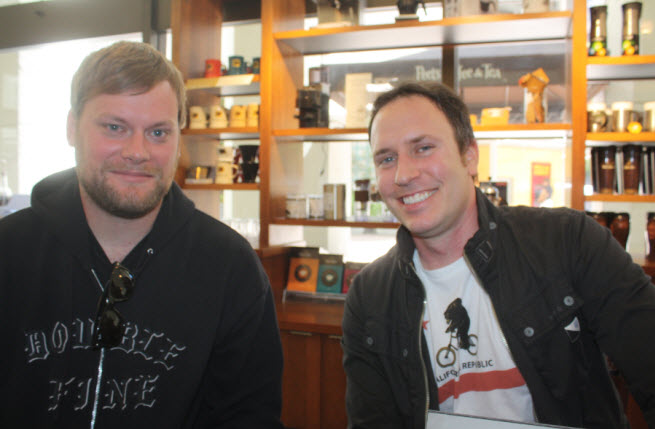 Double Fine Productions showed its creativity when it raised $3.3 million via crowdfunding site Kickstarter to fund Double Fine Adventure, an upcoming adventure game that’s being made with your money.

But that’s not all Double Fine is working on, and it’s not the only way the San Francisco company has raised money. The story behind Double Fine’s creative financing shows the lengths the company will go to in order to not just survive as an indie game development studio but to thrive and earn more money to fund future games — while preserving its independence.

“We’re making a switch from console work-for-hire and going to direct to consumer and free-to-play projects,” said Justin Bailey (pictured right), the vice president of business development at Double Fine. “That process has taken place over the last 18 months.”

If you think of the Kickstarter money as project-specific, or a kind of seed round, then the next batch of money may come from real investors, so that Double Fine can move to more projects and more platforms, said Greg Rice, the producer of Double Fine Adventure.

The 12-year-old game studio has been very dependent on game publishers in the past. Schafer left his job as a game designer at LucasArts in 2000 and started Double Fine Productions that year. The company created Psychonauts, an acclaimed original platform game that was published by Majesco for the original Xbox in 2005. Then it made Brütal Legend, a comic rock-star adventure game that Electronic Arts published in 2009.

During this time, Schafer established himself as one of the zany, most creative people in the video game business. He was hilarious as the emcee of one of the recent game awards shows, and his creativity is reflected in the humor and original stories in his adventure games. His personality came through in his various Kickstarter promo videos, and that no doubt helped his company raise even more money via fans.

“We try to be as creative with our business development as we are with our games,” said Schafer. “We are always on the lookout for ways to break the traditional mold for game funding. So when we see new opportunities come up — like Kickstarter, angel investment, or other alternative funding models — even though they might seem new and risky at the time, they are also very attractive to us. Because, let’s face it, anything beats the traditional game funding model. It’s like a loan with a really horrible interest rate. No revenue usually until you’ve not just paid back the development cost, but paid it back many times over. Plus, lots of entanglements with intellectual property usually.”

Double Fine might have continued in that pattern, but its games weren’t megahits (despite Psychonauts receiving heaps of critical acclaim), and publishers have become even more risk averse these days. Double Fine has managed to get traditional deals with both Sega and Microsoft, making games for them.

But on top of this, Schafer turned to Kickstarter, where he raised far more money than he ever hoped to get for his next big game, Double Fine Adventure. Kickstarter allowed Double Fine to fund a big game without giving up any equity. And if that game does well, it will likely fund yet another game.

Yet the company’s ambitions run far beyond what it can do with the Kickstarter money. The company hasn’t really talked about the other options it has developed, until now. A year ago, a rich guy named Steve Dengler pinged Tim Schafer, the chief executive of Double Fine, via Twitter. Dengler, the founder of currency exchange web site Xe.com, was a longtime fan and fronted $1 million so that Double Fine could make more games. The money from Dengler, a kind of superangel, went toward the first port of Psychonauts for the Macintosh, as well as the publication of Stacking and Costume Quest on the PC. Outside investment has also spurred the company’s first iOS game (for Apple iPad, iPod Touch, and iPhone).

“I’m a fan with money,” said Dengler. “That pretty much sums it up. I’ve been a fan of Double Fine for years, and now I get to help them make new games on their own terms. Traditionally, a developer needed a publisher to get their work made and out to the fans. And traditionally, that relationship was pretty one-sided. But together, we are changing that.”

“What I do want to do is help them make great games for their fans because I am one of those fans,” said Dengler. “And so far it’s working wonderfully. It’s tremendously satisfying.”

Schafer said, “The great thing about having multiple teams at Double Fine is that we can experiment. We can try out different game genres, platforms, and sizes, and we can try out different funding models. So when someone like Steve Dengler sends a tweet my way, asking how much it would cost to port Brütal Legend to PC, I’m in a position to have a serious conversation with him. I don’t have to say, ‘Sorry, everybody’s busy on this one big game we’re making over here.'”

Schafer added, “Steve is great because he is literally an angel investor — he came out of the clear blue sky, has mysterious powers, and he only uses them for good. Oh, and he can fly, too…in his Cessna. He loves games, he likes Double Fine, and he wants to remove the money obstacle from our path and help us achieve our creative ambitions. The best thing about a partner like Dracogen is the creative freedom. There’s no bureaucratic overhead like time-wasting green-light committees and milestone acceptance tests. We get to focus on making the game good because we have his trust, and in exchange for that, we offer him complete transparency into the product. Mutual trust and mutual respect is critical in this kind of relationship.”

Double Fine is also self-publishing games on Steam (such as the Mac port for Psychonauts and Costume Quest on the PC), the digital distribution service owned by Valve. It gives a commission to Valve, but it no longer has to share a cut with game publishers. Double Fine also eventually hopes to publish games directly on its own web site where consumers could download and play games directly, with no middleman at all. With a free-to-play game, Double Fine will figure out how to reap profits from the sale of virtual goods. It is through these measures that the company, which has only 60 employees, hopes to stay both small and independent.

Such creative financing has enabled the company to get at least five different game efforts under way at once.

“It is complicated to keep straight, but we have crowdfunding, self-publishing, the mobile studio, and some legacy business,” said Bailey. “We are now majority-funded by crowdfunding or outside investment. By next year, hopefully that transition will be complete,” with almost no traditional publishers or work-for-hire deals funding the games.

But if it raises a further round of money from outside investors, such as venture capitalists, then Double Fine could experiment further and take its games to all the platforms where people want to play, said Rice. VCs often bring a lot of partnerships with them that could prove very valuable to indie gamemakers. And while venture capitalists have funded a lot of fresh mobile and social game teams, Double Fine has a team that has had a longer track record.

“Our advantage is we have developers who already know how to make triple-A content,” said Bailey.

Double Fine’s doors are open. Just as the Kickstarter fans came rushing in to give the company their money, now the venture capitalists can do so. It’s fresh territory for the company, which doesn’t have a lot of experience working with Silicon Valley VCs. But it shows that having multiple irons in the fire and multiple sources of investment are important parts of any diversified indie game company that is in it for the long haul.

“We’ve needed a lot of money up front from publishers in the past, but over 12 years, we’ve been in transition,” said Bailey. “The publisher model is changing.”

“And indie gaming is growing up a little bit and maturing as a business process,” said Bailey. “Our goal is to fund ourselves as an independent game developer. You want a diversified approach. The nicest thing is the indie community is tight, and we are all trying to help each other in every way.”

Over time, the company will still work on what it considers to be triple-A games. But console titles, where a publisher funds a huge game project for publication on just one platform, are going to be less and less likely. Ouya is another option as an open indie game console platform, and Double Fine is watching it closely, but it’s still early to commit to it.

“[Ouya’s] philosophy falls in line with ours,” said Rice.

And one day, if Double Fine is successful, it might fund other fellow indie game studios. If you want to send bags of money to Double Fine, send an email to justinbailey@doublefine.com.