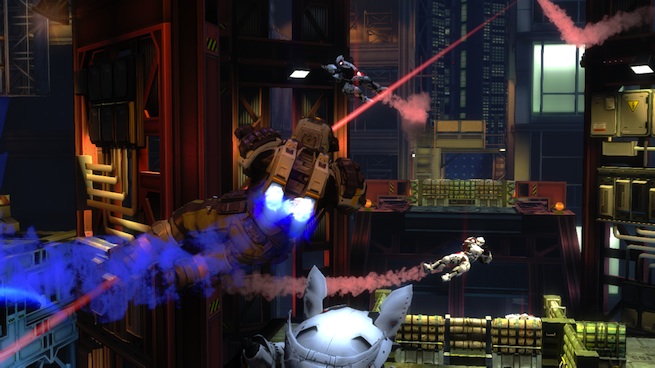 “Third-person flying cover shooter” doesn’t exactly roll off the tongue. But Scribblenauts developer 5th Cell is betting that Hybrid’s radical flight mechanic might just be what the oversaturated genre — which, let’s face it, hasn’t changed much at all since the first Gears of War — needs.

In Hybrid’s dystopian tale, a large hadron supercollider imploded, sending the world into utter chaos. Emerging from the wreckage was a humanoid species known as the Variant, along with a mysterious new resource: Dark Matter. The Paladins, a faction representing the surviving humans, rose up to combat the new threat. The two forces are forever locked into a series of 3-on-3 multiplayer matches in order to horde more of the Dark Matter for themselves, and it’s up to you to decide which group you want to fight for.

As the fourth title in the Summer of Arcade promotion on Xbox Live, Hybrid stumbled out of the gate with server problems so severe that some players couldn’t even connect to the main menu, let alone try to find others to play with. Microsoft and 5th Cell temporarily pulled it off the XBLA marketplace to resolve these issues, only to be restored to the service just a few hours later.

Whatever their team of engineers did, it worked: Aside from a few connection issues (mentioned below), Hybrid runs without a hitch.

The rhythm of futuristic warfare
The beauty of Hybrid’s jetpack-fueled soldiers is how it forces you to thoughtfully consider your movements in combat. You have to commit to a path before you embark to a specific location on the map; speed boosts and an emergency retreat button give you some leeway if that area turns out to be too hostile. But for the most part, you must be careful. If you fail to anticipate the enemy’s movements, you’ll end up flying straight into their line of fire.

Contrary to what you might think, flying from one piece of cover to another offers a surprising sense of freedom. You still feel like you’re in control. The unusual vertical perspectives, such as taking cover while upside down, challenges you to observe your environment at all times since enemy fire can come from almost all sides and angles.

Once the gameplay clicks, the ebb and flow of combat becomes almost hypnotizing — except for the occasional lag, you never feel like you have to fuss around with movement at all. Everything about it just works. 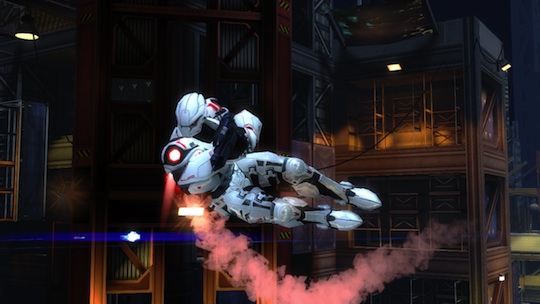 Experimenting with loadouts
Few things are as satisfying as turning your enemy’s drones against them: In one harrowing instance, two Paladins amassed a small army of the A.I.-controlled robots as a bonus from their killstreaks, making them almost untouchable. Quickly, I tossed a Drone Hack grenades into their makeshift fortress, causing their machines to immediately fall under my control.

Coupled with my Commander specialization, which increases your drones’ armor and attack damage, I eliminated the camping players, leading to a decisive Variant victory.

This is just one example of some really interesting possibilities when you experiment with Hybrid’s interplay of weapons, abilities, and specializations. Whether you want to be deadly at close quarters combat (with a shotgun, META shield, and an armor buff equipped) or dedicate yourself to supporting your team (with Medi-Heal and the Spec Ops specialization that decreases an ability’s cooldown time), you’ll find a lot of flexibility in crafting your own custom play style.

Refreshing take on traditional multiplayer modes
With Hybrid’s inclusion of vertical combat spaces and A.I. drones, traditional modes like team deathmatch and king of the hill feel remarkably distinct from any other multiplayer game out in the market right now.

Team Deathmatch plays like a fast-paced strategy game as you try to rack up more drones than your opponents, as well as using your abilities to slow their progress. Tactics, a bomb planting and defusing mode, and Artifact, where each team fights to retain possession over an object (whoever holds it the longest, wins), are also fun versions of familiar formulas thanks to a chaotic battlefield filled with distinct abilities and diversions. 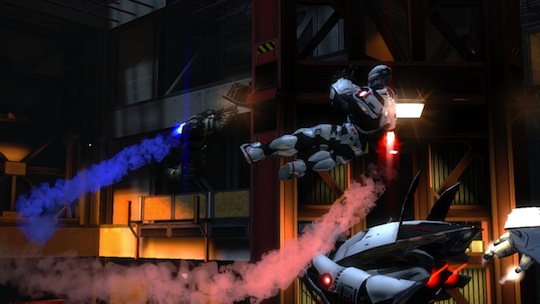 Long matchmaking times
Matchmaking with other players — a process in Hybrid that seeks out open lobbies and proceeds to fill them after every game — can feel excruciatingly painful. Sometimes it lasts as long as 10 minutes and other times as little as 30 seconds; in my experience, the average was 3 to 5 minutes in length.

Despite using the time to catch up on my Twitter feed (at one point I even managed to make myself a sandwich in between games), I found this unacceptable. Nothing saps your momentum faster than having to sit at a loading screen for minutes at a time, especially if you performed well in your last match. According to the leaderboards, I logged about five hours into the game; however, if you take into account the collective time lost from waiting around, I’ve “played” at least double that amount this past weekend.

5th Cell community manager Emily Halpin told concerned players in the official Hybrid forums that “these long periods of matchmaking should be alleviated as the community grows and more players join.”

An unclear metagame
The persistent online war between Paladins and Variants is meant to give players a sort of end-game to the constant battles being waged across the world. Plot details are kept to a minimum: Each side is in a mad race to collect 100 units of Dark Matter, though you’re never told why or what it does. Once one faction reaches this milestone, a story event occurs, resetting the world map so players can fight for countries all over again. As of this writing, the current “season” sees the Variant faction slightly edging out the Paladins, with 42 pieces of Dark Matter compared to their measly 35.

It’s a neat idea, but it’s far from a compelling reason for me to care about beyond the satisfaction of winning a match. This lack of communication also extends to the in-game world map: Even with all the numbers and percentages displayed for each region, it’s still unclear as to how much impact you’re actually having.

As with all multiplayer games, the true test for Hybrid is if it can sustain a dedicated player base for more than just a few months during its launch period. Technical issues already dampened its prospects since its debut, and long matchmaking times are only compounding the problem. But with rock solid mechanics and genuinely interesting ideas behind it, 5th Cell’s innovative shooter still has a fighting chance of bouncing back.

Hybrid is available now for the Xbox 360 as a downloadable game on the XBLA marketplace. The publisher provided GamesBeat with a download code for the purpose of this review.