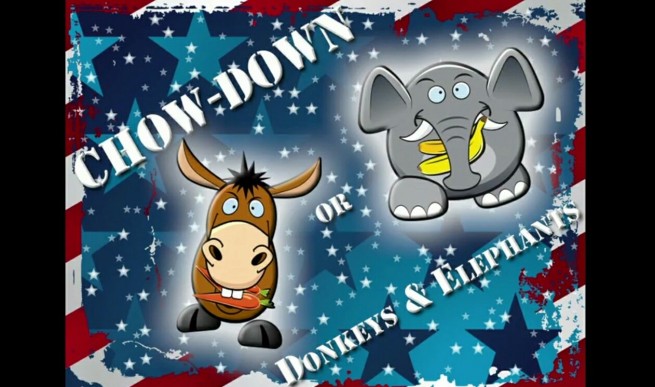 You should probably accomplish something with your day before you read this.

A 14-year-old named Stiven Deleur programmed and released a game for the iOS App Store this summer. Donkeys and Elephants: Chow-Down is a politically themed arcade game that asks players to choose whether they are a donkey or an elephant, the mascots of the Democratic and Republican parties, respectively. Players must then collect as much food as possible as it falls from the sky to get a high score.

Deleur thinks his creation has a potential that is greater than just an entertaining distraction.

“I believe this game can predict the winner of the coming presidential election,” Deleur told GamesBeat. Whenever a player finishes a round, the game uploads the point total to a communal global score for the donkey or the elephant. That way, everyone can keep track of whether Democrats or Republicans are in the lead. It’s a fun twist on what is otherwise a bitter, partisan race.

“I was always very interested in tech,” said Deleur. “When I first got my iPhone, I was amazed at how many different apps and games were on the app store.”

Deleur said he wanted to create something of his own when he read about Robert Nay, a teenager who created the top-selling iOS game Bubble Ball.

“I thought, ‘If he can create an iPhone game, why can’t I?’ So I started researching ways to begin developing, but I didn’t get far because I couldn’t find any good tutorials and explanations.” About two months later, Deleur’s dad approached him about creating something original. That’s when they discovered the Corona software development kit, an easy-to-use framework for developers that allows for multiplatform production.

“I went on [Corona SDK’s] website and found tons of great tutorials, guides, and explanations,” said Deleur. “After that, we started working on the app.”

Deleur and his father Alex, who helped with the graphics, are currently holding a Kickstarter to raise funds that will help them add new features.

“We are on a low budget, so we decided to create a Kickstarter project that will help us fund the game,” said Deleur. The teenager says the money will also help them pay for marketing because while he split the production work with his dad, he’s currently responsible for all the promotion.