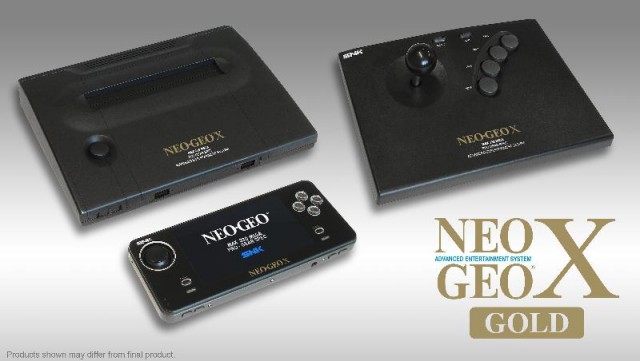 If you have $200 to drop on an expensive nostalgia trip, you could probably do worse than the Neo Geo X Gold, a new handheld machine that plays classic Neo Geo games on its 4.3 inch screen or on your television.

The Neo Geo was the ultimate gamer status symbol in the ’90s. For over $600, you could play arcade-quality titles like the fighting series Samurai Showdown or the sidescrolling shooter Metal Slug. Of course, since many of us were kids or young adults without a penny to our names, we had to rely on occasional trips to the arcade to get our Neo Geo fix. Until now.

The Neo Geo X Gold is an officially licensed portable system that comes with games from the console’s retro library built-in. The machine, created by video game wholesaler Tommo, can also plug into a TV, in case you want to replicate the home console experience. The $200 package also includes a classic-style controller, plus a dock for the handheld device modeled after the original system.

Here’s the list of games that come with the Neo Geo X Gold, according to Ars Technica:

The original Neo Geo was an arcade cabinet that owners could fit with large cartridges for different games. This meant that while most machines could only play a single title, Neo Geos could be constantly updated. When hardware manufacturer SNK realized there was interest outside of arcades for its system, they created a Neo Geo home console. While its graphics were superior to its contemporaries at the time, the Super Nintendo and the Sega Genesis, its hefty price kept it from a mainstream audience.

The Neo Geo X Gold gives many of us our first chance to own a real Neo Geo system. Sure, $200 is nothing to scoff at, but it sure beats the small fortune they originally went for.