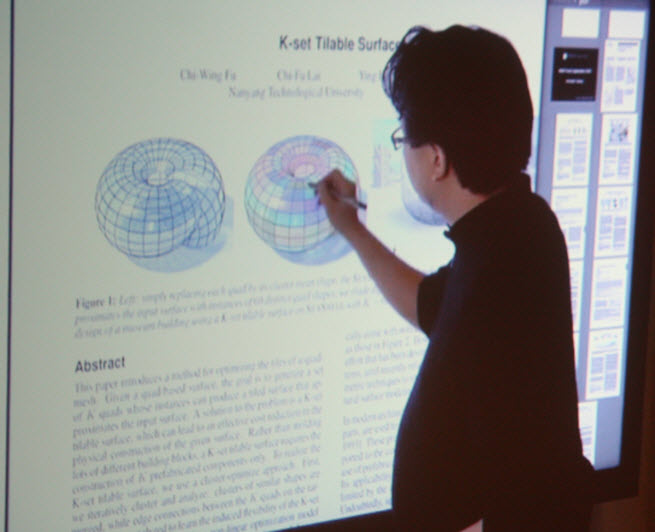 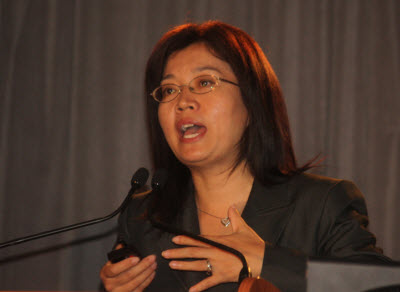 The touchscreen revolution in display user interfaces has been going strong since Apple introduced the iPhone in 2007. Today, it shows no sign of stopping, and the market for touchscreen modules is expected to double from $16 billion in 2012 to $31.9 billion in 2018.

That bullish forecast comes from DisplaySearch, which is holding its Emerging Displays conference today and tomorrow in Santa Clara, Calif. It means that the touchscreen technology market is full of opportunities for hardware and software companies that are part of the huge $200 billion-plus display ecosystem, said Jennifer Colegrove (pictured above), the vice president of display technologies at DisplaySearch, in the opening talk at the event. But the market can be treacherous because of its cycles of overcapacity and commoditization that happen over time.

More than 200 suppliers have entered the market, providing technology in 12 different categories of displays. The aging resistive touchscreen technology still has 97 suppliers, up from 64 in 2009 — all providing screens that can detect touches from any kind of object well but are not really meant for multifinger touches. Projected capacitive screens, which have risen dramatically due to the popularity of multitouch (which uses multiple fingers on a screen), has grown from 27 suppliers in 2009 to 102 in 2012.

As you can probably guess, it’s hard to make money in the display business with so many suppliers. The overall display industry still loses tens of billions of dollars a quarter, particularly due to the saturation of flat-screen TVs, said Jeff Han (pictured at top), founder of Perceptive Pixel, a big-touch-display pioneer. Han’s company was formally acquired by Microsoft a couple of weeks ago to work on new display technologies.

After his talk, Han asked a panel of speakers, “Where is the best place to be to make profits in the industry?” 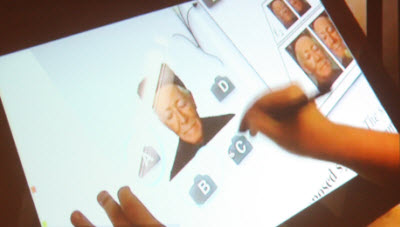 The suppliers include companies such as Corning, which makes the sturdy Gorilla Glass used in displays. Others include “cover lens finishing” suppliers such as Fuji Crystal. Others provide materials such as indium tin oxide glass and film components. And there are makers of touchscreen controller chips such as Atmel, Synaptics, Cypress, EETI, and Elan. The latter companies make chips that are smart enough to deal with noise problems such as a user’s unintentional palm touch on a screen.

All of these suppliers are in search of better large-screen applications of touch. Today, there are 24 major applications for touchscreens. The biggest are smartphones, tablet computers, and laptops.

Colegrove said that projected capacitive technology has probably hit its peak and new technologies will supplant it. Those include putting the sensor for touch on the cover, or a third piece of glass that protects the actual screens that sandwich lighting materials in a liquid crystal display. Other methods include in-cell and on-cell technologies that, like sensor-on-cover, reduce the cost, thickness, and weight of touchscreens. 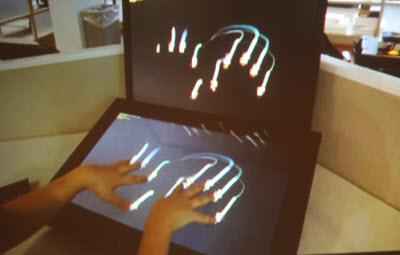 Han said he sees a big future in “premium experiences” with touch technology, such as high-quality collaboration systems where enterprise workers share documents.

He said Microsoft’s Windows 8 operating system coming this fall will enable touchscreens in a big way, allowing desktop PCs, notebooks and tablets to embrace touchscreen technologies that are more precise than in the past. He believes that the future of touch will be a combination of finger-touches on a screen as well as pen touches. You could, for instance, work on a desktop-size display. You could move the position of a virtual paper with your left hand and then draw pictures or trace images using your right hand.