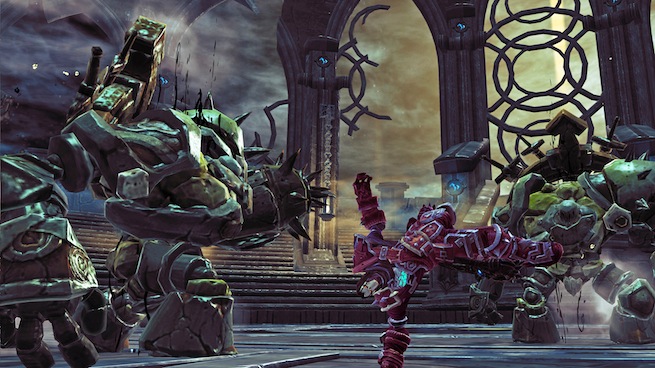 Whirling scythe blades fly across the dungeon, splitting skeletons, mummies, and wraiths into gorgeously rendered bits and pieces. Clearing the space is an effort of strategically skillful button mashing, a matter of urging Death, one of the terrifying Horsemen of the Apocalypse, to swipe, slash, evade, defend, and activate special skills to rid the realms he travels of corruption in order to prove his brother’s innocence and restore humanity to the mortal plane.

If only the beings along the way weren’t so demanding about fetching them this or that dead lord or this or that piece of an ancient artifact. I am Death, goddamnit. I do not do fetch quests.

Except that I do.

Set during a similar timeline as the first Darksiders game, the sequel plays to the cheap seats with melodramatic, operatic motives and plots, telling a tale of Corruption, doomed souls, and a pantheon of major and minor godlike beings culled from a variety of Western mythologies.

THQ’s Darskiders II is a sprawling epic that ranges across three major worlds: The Tree of Life, The Tree of Death, and Earth. Combine the mechanics of God of War, Prince of Persia, Diablo III with the visual style of Warhammer, World of Warcraft, and the Spawn comics, and you have Darksiders II. Death, the brother of War (the star of the first game), is out to restore humanity to Earth after the brothers allegedly triggered the Apocalypse just a bit too early.

Death is sure that War is innocent of this charge and tears through into hordes of demons, skeletons, and monsters to prove it. Yet his travels keep taking him hither and yon on the way to his ultimate goal, the Tree of Life, which he hopes holds the exonerating answers he seeks.

Lots of loot
Darskiders II has a dozens of chests to rip into. Death doesn’t just open them, either. He uses his magical door-opening disembodied arms to tear each and every chest asunder, loot exploding out in all directions. Most of this include gilt, or gold, which Death can use to upgrade weaponry, purchase combo moves and potions, and so on.

The user interface does a great job of letting players know if found loot is better or worse than currently equipped items. Death carries scythes for fast attacks that he can combine into whirling-dervish attack moves that just look fantastic on screen. He also carries a secondary weapon — either hugely damaging slow warhammers or battle axes or gauntlets with a little faster refresh. The armor includes boots, gauntlets, shoulder pads, and cloaks, each adding defense points to help Death stand just a few more hits and take just a little less damage. Half the fun here is in keeping Death’s equipment upgraded, his weapons causing the most damage as possible, and using other items to give you better and better stats. 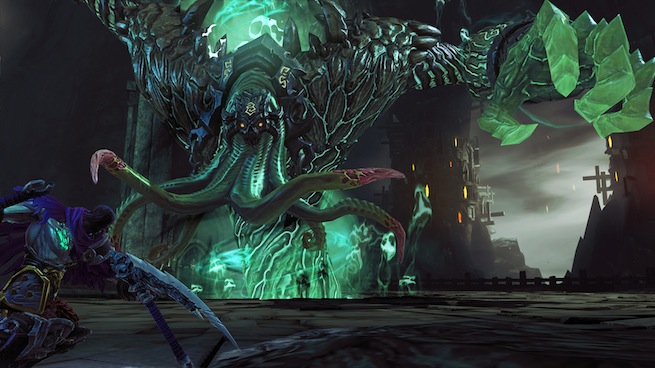 Fluid animations, heroic vistas, and distinctive design
Darksiders II is gorgeous. As players will be staring at it for 20 hours to 40 hours, easy, it’s great that the levels, characters, and combat animations are lush and beautiful. The color palette for Death is browns and shades of gray, with bright, shiny greens and purples for the magical effects he carries around on his wrists. The Maker’s realm is lush greens and browns, natural earth tones, while the Land of the Dead is all lifeless grays and browns. Skulls cover the doors in this second realm, with eyes that light up green as Death approaches.

Minuscule loading times
See? It totally is possible to create a game that feels huge without separate between-environment loading screens. On very few occasions, between larger environments, a loading icon comes up. And then it goes away, superfast. I was never waiting for the game to get back to the action, not once. However they did it, the developers deserve credit for this, because it really added to my enjoyment.

The small touches
You know those Continue screens in most games? They look like a slash screen, may include some camera panning around, focusing on a generic environment or prerendered character model, and are rather disconnected from the gameplay. In Darksiders II, the Continue screen looks very similar. Death stands there, full of menace, plasma swirling around his fists. Yes, he does look like he’s wearing his most current outfit. And, yes, that is the same environment you last left him. And, wow, when I hit the button, the camera pans around behind him, and there we are, in the very spot we left. It’s a subtle, well-designed way to get players back into the action as soon as possible.

Fast travel is another well-implemented and subtle touch. You can easily access it from the map. It allowed me to play the way I always play games like this first time through: rushing through to the end, not stopping for the scenery along the way, aiming for the main quest goals like some sort of demented bulldog with a tug-of-war toy in its mouth.

The voice work and soundtrack
Michael Wincott (The Crow, Alien Ressurection) voices main character, Death. The voice is as gruff and gravelly as we’d all expect from the incarnation of Death, but Wincott plays him full of different tones and auditory colors, helping players connect with the main character. How  do you make one of the scariest Horsemen of the Apocalypse sympathetic? Get a fantastic actor to play him. 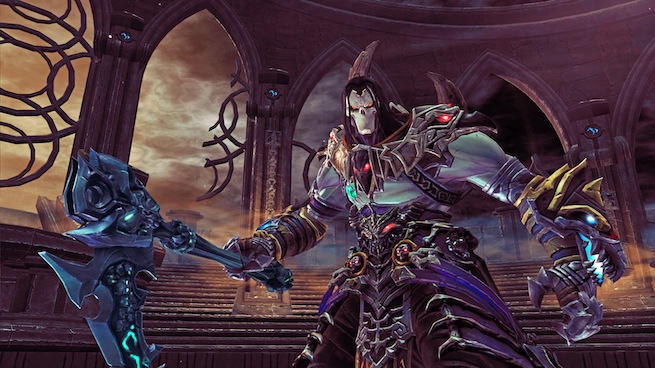 Even the supporting characters and voices are extremely well done. The disembodied voices in the Gilded Arena are scary; pitched higher and raspier than any other voices, it gives them a quality of madness that feels especially creepy. I hear these voices in my nightmares.

Jesper Kyd‘s (Assassin’s Creed, Borderlands, Hitman) soundtrack is as lush and gorgeous as the artwork, bringing to mind the better film and television soundtracks of late, such as Game of Thrones.  I might even go so far as to recommend the soundtrack to folks who aren’t actually playing through the game – it’s that good.

The story
The story is full of operatic melodrama, brought to life with full comic-book gravitas. Everyone speaks as if the world depends on each of their sentences, and if using the internal logic of the game, it does. The timeline of the events in Darksiders II is apparently the same as the events in the first game, though with a different set of maps and story beats. Each new cutscene tells a little bit more of what’s going on, and the initial start up screens recap the story with an image and a voiceover, similarly to the Final Fantasy XIII recaps. While Darksiders II’s story is far more comprehensible than that of FFXIII, a quick reminder of where we’re at in the story is a nice touch.