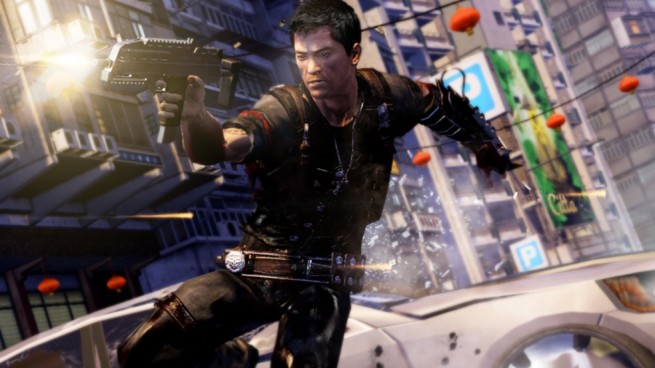 Square Enix’s Sleeping Dogs is a Friday-night escape, something you enjoy while digging into a bag of burned microwave popcorn. It’s simple, predictable fun — just like the best Hong Kong police movies.

After all, you’ve played Sleeping Dogs before in one form or another, and you’ve probably experienced its story, too. The United Front Games-developed title is a solid, mission-to-mission, open-world action experience. You’ll hurt a lot of thugs, drive a lot of cars recklessly, and work for a lot of shady characters — all while kicking and capping through a you’ll-see-everything-coming-by-a-mile storyline.

And that’s the point.

This is the Chow Yun-fat of games — rough, cliché, yet quintessentially badass like the Hong Kong actor.

Live out your undercover-cop-posed-as-burgeoning-Triad fantasy
In Sleeping Dogs, you are Wei Shen, an undercover supercop with a tragic past. You start the game by breaking into a low-level Triad gang, hoping to gain a foothold within Hong Kong’s seedy, organized-crime-ruled underworld.

Wei is practically unstoppable. He’s got the gun skills, gut punches, and gear-busting driving sense to stand toe-to-toe with any tattoo-riddled gangster — along with the smooth lines to woo any attractive female acquaintance. So, yeah, he’s perfect for the part.

Open-world crime that pays
Many releases have attempted to cash in on Rockstar Games’ tried-and-true Grand Theft Auto formula, and many of them have failed. For the most part, Sleeping Dogs gets the sandbox structure right. 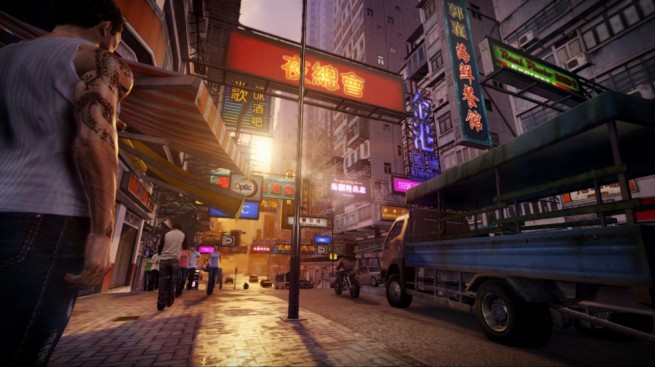 The game’s version of Hong Kong is densely populated, topographically rich, and filled with interesting nooks and crannies just waiting to be crashed into. Obnoxious street vendors yell at you to buy fish balls, fish dumplings, and other fish-flavored fare. Driven-over parking meters reward you with their spoils. And lazy workers play impromptu dice games in an alley instead of focusing on their jobs.

If you’re worried about this feeling like a second-rate GTA, you don’t need to. Hong Kong is your oyster, ready for your blood-stained blade to shuck.

A melting pot of personality and personalities
Hong Kong is a great setting for an open-world action game. In fact, the tightly packed, claustrophobic nature of the city reminds me of the living, breathing backdrops from Sega’s Shenmue and Yakuza games. Sleeping Dogs’ Eastern-flavored surroundings are teeming with character, such as the pink, neon glow of the night-laced streets and the charming, Cantonese-English hybrid dialect that the characters speak.

Free run away from the cops
You won’t just be driving away from the police with your tricked-out ride; you’ll also be running away from them the old-fashioned way. Wei effortlessly darts and dashes through Hong Kong like a parkour prince. All you need to do is tap a button to hop over obstacles or to grab a ledge at the end of a wall. 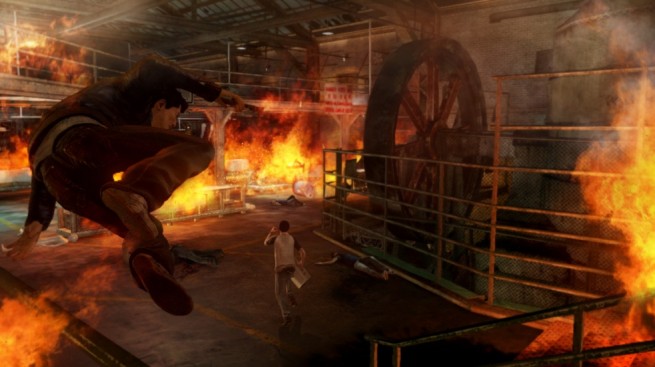 The game also throws you into intense chase sequences, similar to the on-foot perpetrator pursuits in L.A. Noire, where you have to run down an enemy. These moments help shuffle the tempo, even though they do get a bit monotonous.

Fisticuffs of fury meet hard-boiled shooting
One of Sleeping Dogs’ strongest features is its robust combat system. Surprisingly, most of the game’s fighting is done with bare hands and swift feet. Taking a cue from Batman: Arkham Asylum, attacks consist of one-button combos complemented by timed counters and grappling. You’ll take on gangs of mobsters, and, as the kung-fu-fighting Wei, you’ll dispatch them in short order — just like a cook filling requests for dim sum in an adjacent restaurant’s kitchen. 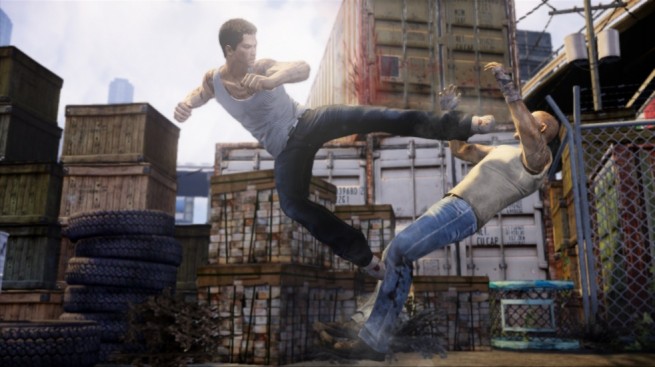 Gunplay is clearly inspired by third-person, cover-based shooters. You can glide from barrier to barrier, protecting yourself from oncoming fire while returning plenty of rounds yourself.

A significant part of these skirmishes actually take place while driving, which adds some appreciated variety to the projectile-based proceedings. I couldn’t help but feel a rush of satisfaction when I launched cars and motorbikes into the air after blowing out their tires with my bullets. And the adrenaline flowed even harder as I leapt wildly from vehicle to vehicle, like in the PlayStation Portable’s Pursuit Force series, turning my road rage into an air raid.

A dark history that comes back to haunt you
As a game, Sleeping Dogs has a few things in common with its street-savvy hero. Both are layered and interesting, yet both are confronted with remnants from a murky past.

Sleeping Dogs went through a few name changes and narrative rewrites over its lengthy, multistudio-and-publisher development cycle. Even the initially female protagonist had to go through gender-reassignment surgery, leading to the final game’s maniacal man-about-town Wei.

Because of this checkered backstory, the final playable product feels unpolished in spots. Scripting errors sometime occur on random missions, causing enemies to nonsensically plant themselves in place when they should be running. The title’s graphics engine is far from cutting edge. Character models have a plastic action-figure look while many of the polygonal bodies acting as street-and-building filler are constantly repeated. Even some of the storefronts are nothing but flat images that poorly simulate actual dimension. Grand Theft Auto IV, which came out four years ago, looks better. And that’s a problem.

But to United Front’s credit, just getting this release out the door — in its appealing state — is an achievement.