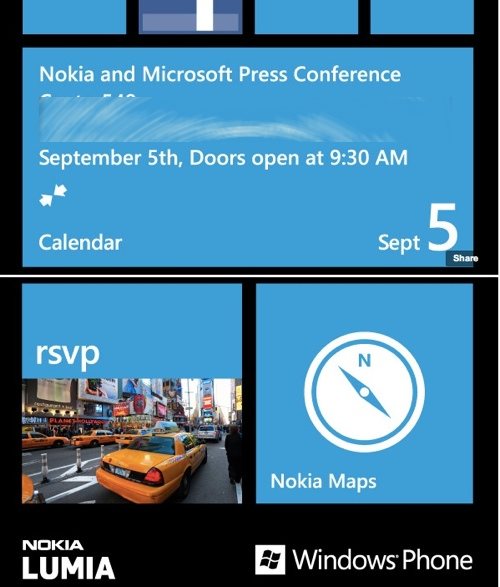 Nokia just sent out invitations for a joint NYC press event with Microsoft on Sept. 5. Judging from the invite’s design, as well as the impending launch of Microsoft’s new mobile OS, the event will clearly focus on Nokia’s first Windows Phone 8 devices.

We heard last week that Nokia and Microsoft planned to announce Windows Phone 8 devices as early as Sept. 5. Now that the date is locked in, it’s even clearer that the companies are trying to preempt Apple’s iPhone 5 announcement, which is rumored for Sept. 12.

As I’ve said before, given the general media insanity leading up to a new iPhone announcement, Nokia likely needs more than a week of lead time to truly make consumers excited about its new devices. And from what we’ve seen so far with Nokia, its new phones probably wouldn’t be available for several weeks after their unveiling — long after the iPhone 5′s expected Sept. 21 release.

Perhaps even more than its initial Windows Phones, Nokia’s Windows Phone 8 entries will have to be particularly innovative to sway consumers. Nokia and Microsoft are facing stiffer competition from all sides, and gadget hounds likely still feel burned by Nokia’s refusal to upgrade its earlier Lumia devices to Windows Phone 8.