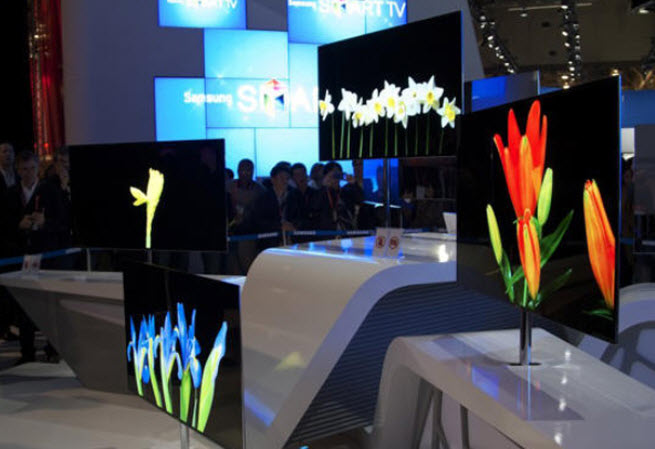 They cost a lot now, but OLED displays are one of the biggest hopes for the TV industry to sell more screens to a saturated market. The organic light-emitting diode displays are thin and vibrant, and by 2019 the market for those screens could reach $44 billion, up from $4 billion in 2011, according to market researcher DisplaySearch.

That’s a significant annual growth rate, based mainly on the growth of mobile devices and TVs. Right now, the market is split into small screens for mobile devices such as photo frames, smartphones, Sony’s PlayStation Vita gaming handheld, and Samsung tablets. In 2011, those small screens of 5-inches or less sold more than 19 million units. In 2012, that number is expected to grow to 150 million units, said Jennifer Colegrove, vice president of display technologies at DisplaySearch, in a talk at the Emerging Display Technologies conference in Santa Clara, Calif.

When compared to traditional liquid crystal display TVs, OLED TVs have both advantages and disadvantages. Right now, the OLED TVs cost a lot, since manufacturing yields are lower than active-matrix LED TVs. But OLED TVs are much thinner, as thin as 0.05 millimeters, compared to .8-millimeter LCD TVs. OLED TVs have better viewing angles, better color gamuts, but lower screen resolutions. The OLED screens are faster, with nanosecond response times and no motion blur, while LCD TVs have response times in the milliseconds. The contrast ratio is higher for OLED TVs. And OLEDs consume a lot less power. What that means is that OLED TVs will likely take over once the cost issues are neutralized.

The earliest passive-matrix OLED screens started shipping in 1999, but now those screen sales are flattening. The active matrix OLED screens are growing a lot faster. Samsung has a commanding market share lead with 70.7 percent of the OLED display market. Visionox of China is No. 2 with 7.5 percent; WiseChip is No. 3 with 6.2 percent; Pioneer has 4.3 percent; TDK has 4.0 percent; and Sony has just 0.9 percent.

Colegrove said that a lot of new active matrix OLED display factories are in the works. In the next three years, 10 new factories will come online or be upgraded. All of them are in China, Japan, Korea, or Taiwan. As those factories come on line, Colegrove predicts rapid growth of OLED TVs after 2015. OLED technology is also used in small flexible displays as well as OLED lighting. The lighting OLED market is expected to hit $6.3 billion by 2018. The presence of a companion market in lighting will help reduce the overall costs of the technology.