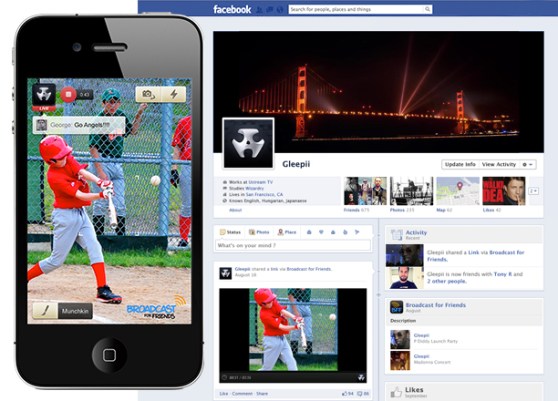 Ustream wants to make everyone into a broadcaster, and to do that it’s tapping into the social network that everyone’s already using: Facebook.

Today the company is launching Broadcast for Friends (BFF), an iPhone app that allows Ustream users to broadcast directly to their Facebook friends.

While Ustream already offers an app for both Android and iOS, its latest one goes a bit further by integrating directly into the Facebook Timeline. This means there’s no need to log in: Users just give the app permission to connect to their Facebook accounts and they’re ready to start broadcasting.

Ustream marketing VP David Thompson gave VentureBeat a demo of the app earlier today, and the first thing users will notice about it is just how simple the whole process is. Setting up a stream took less than 30 seconds, and the video quality was clear and smooth. 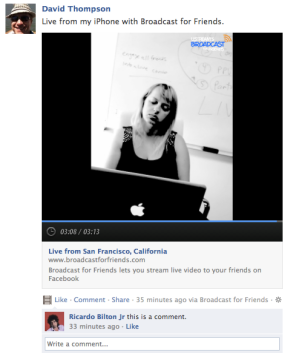 On the Facebook end, BFF allows users to comment on videos, which broadcasters can see in real time. Thompson calls this “social broadcasting”, and it adds a nice level of live feedback to the whole experience.

With the app, Ustream hopes users will broadcast events as personal as their kids’ first steps to those as public as concerts and sporting events. One of the app’s best features is that it will automatically upload users’ finished broadcasts to their timelines, which saves them the trouble of uploading them to external services like YouTube.

But here’s the big question: Why didn’t Ustream just add the Facebook functionality to its current app?

As it turns out, the original Ustream app was born out of requests from Ustream’s professional broadcasters, who wanted to take the Ustream experience mobile. Which means that while the app is ideal for professionals,  it’s a tad too complicated and feature-heavy for the sort of mass audience Ustream is targeting with BFF.

“We wanted it to be the most simple user experience possible,” Thompson said.

Right now BFF  is only available for iOS, though Thompson says it’s a smart assumption that an Android version will be available down the line.