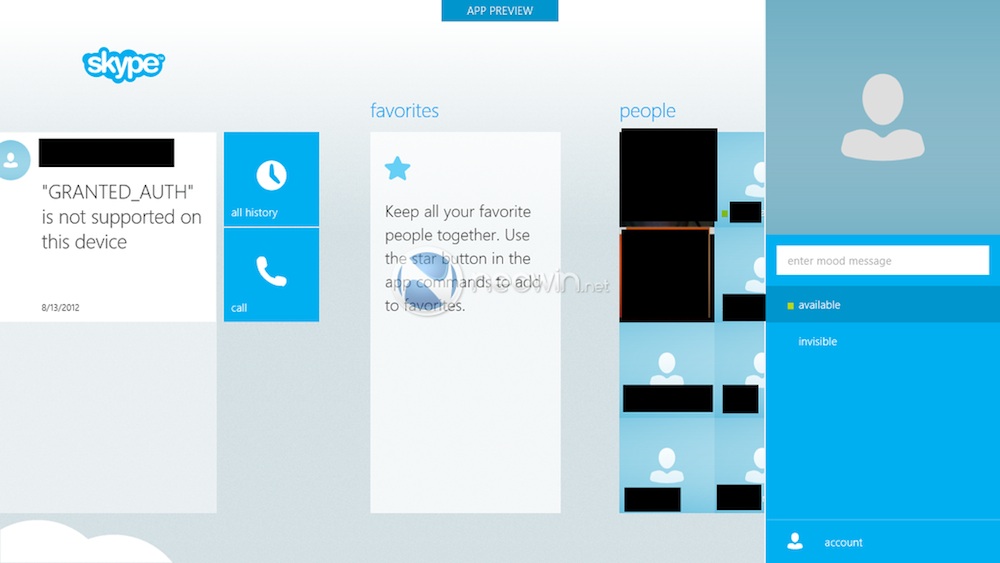 Microsoft is apparently getting ready to launch a new version of Skype that’s been optimized for the company’s forthcoming Windows 8 operating system.

Windows blog Neowin managed to get its hands on the new app today, which is clearly marked as a preview version. As you can see from the screenshot above, the app features the familiar Windows 8 user interface tiles, which seems like a good fit — especially for anyone primarily using the fugly Skype desktop app for Mac like myself.

After signing in, your most recent activity pops up in a column on the left side of the screen, followed by a favorite contacts/numbers/chat rooms column and a block of Skype users currently online. All the text within the app is larger than what most people are probably used to, but not so much that it’s intrusive.

Neowin said it found the new Skype app to be very polished, with no crashes or clarity issues during video or audio calls. With the launch of Windows 8 just around the corner, as well as the newly released Windows 8 RTM 90-free trial, I wouldn’t be surprised if Microsoft started rolling its shiny new version of Skype out to users for a public beta testing soon. (And if you’re jonesin’ for the best apps that are already released, be sure to check out VentureBeat’s top 10 killer Windows 8 apps feature.)

We’re reaching out to Skype and Microsoft for more information about the Windows 8 app and will update the post with any new information.