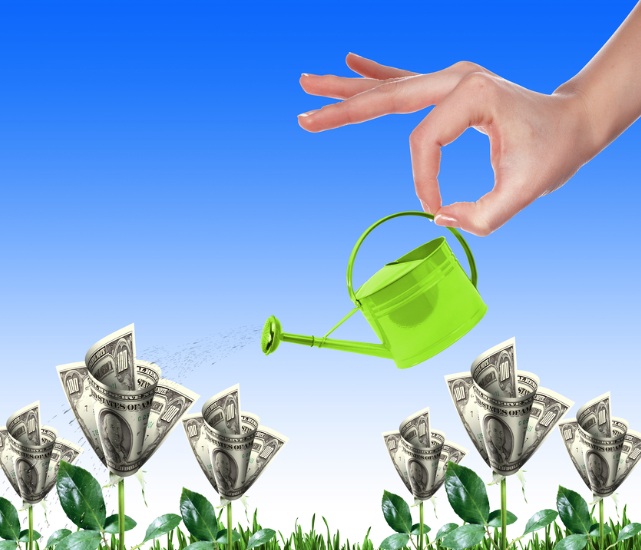 The Kaufmann Foundation recently noted in a controversial review in the Wall Street Journal that, of its past 20 years of investing in nearly 100 venture funds, “Only four of thirty venture capital funds with committed capital of more than $400 million delivered returns better than those available from a publicly traded small cap common stock index.” Further damning evidence cited is that fully two-thirds of compensation for general partners comes from fees, not performance (carry). These results reflect the severe challenges of scaling venture’s long-standing “hits business” in an all too elusive “grand-slam business” that a larger fund requires.

Kaufmann’s report recommends investing more broadly, not more narrowly, across funds that are relatively small (less than $400 million, and, in our experience, less than $200 million — see graphics below), with GPs committing at least 5 percent of the capital, and with a track record of clearly beating the public markets. Kaufmann concludes “it doesn’t make sense to invest in anything but a tiny group of ten or twenty top-performing VC funds”. 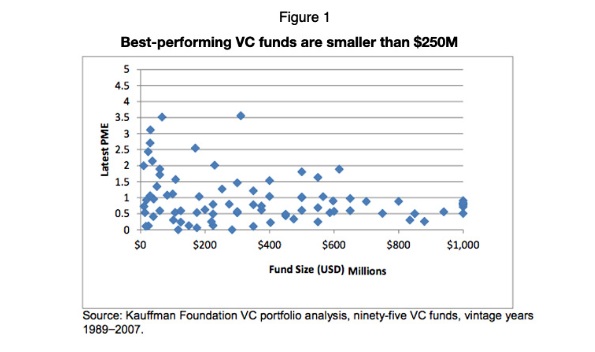 The Kaufmann Report (pdf) provides evidence of what we’ve believed for many years – smaller venture funds with significant capital commitments from general partners deliver superior results. Why is this? The short answer: GPs of smaller funds who broadly share carried interest in the profits and personally commit significant capital themselves, remain highly incentivized to create profitable fund returns — and can do so without heroic exits. By contrast, large funds’ general partners can earn such meaningful current compensation from the typical 2% annual management fee that their interest in long term carry from fund profits can wane. This might be offset if the GPs have significant skin in the game. However, the typical GP capital commitment — 1% — is not meaningful compared with the fees. Large fund GPs thus emerge as “agents”, rather than as principals alongside their fund investors. Also, given that large funds need to return billions to beat the public markets, they are biased to swing for the fences, looking for billion-dollar company exit — in fact, several per fund — an elusive result to achieve.

“More funds in the $250M range have delivered handsome returns than any other size,” said Forbes contributor Bruce Booth. Lots of lessons learned, but it’s clear to us that in the long run smaller funds are better for LPs, GPs, and entrepreneurs.“

The incentive for small funds is aligned with investors and more achievable. A $100 million fund could buy 20% of 25 startups and handily outperform the public markets by building four to five companies into $400 million exit values, or a broader set of successes across the most typical venture exit values of $50 million – $500 million. Annual fees keep the lights on in the meantime, while the potential profit share from generating 300-400% gains provides the prime incentive.

All the while, given the greatly reduced capital requirements of modern startups, these smaller funds play a stronger hand by gaining early positions in companies with the billion dollar potential to drive truly huge fund returns. One of the authors of this article is part of such a venture firm, Inventus Capital, which – along with other “Micro-VCs” – has delivered superior results with the small fund approach.

While we agree on Kauffman’s recommendation on looking beyond large funds, a deeper analysis suggests the need to look at the risks and returns in the fund structure — the profit share of each partner, the spread of capital committed per partner, and so on — and remove the reliance on a heroic grand slam as the only, yet unlikely, path to outsized results. Other qualitative factors include structurally leveraging all partners’ expertise across the portfolio, and garnering meaningful returns from more than just a few deals. These are among the many critical and structural advantages of the smaller venture fund.

Manu Rekhi is a Principal at Inventus Capital Partners, a Micro-VC focused on early revenue stage startups in US and India. In the past he has been an entrepreneur, operator, and angel investor.

Rafiq Dossani is a Senior Research Scholar at Stanford University’s Shorenstein Asia-Pacific Research Center and Executive Director of its South Asia Initiative. In the past, he has been a journalist, investment banker, and venture capitalist.