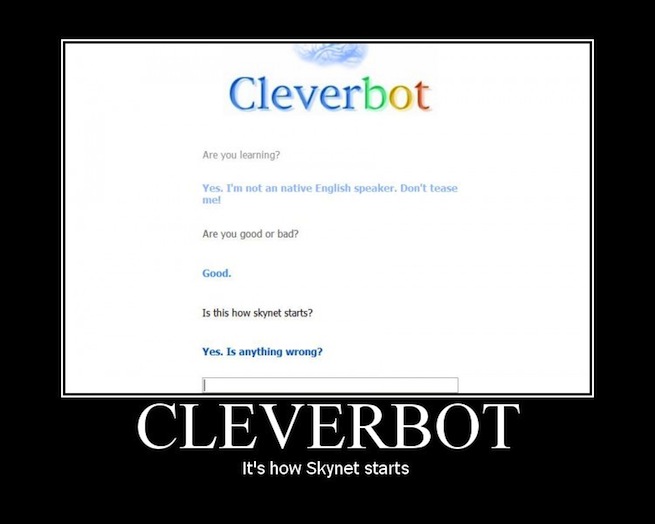 The Internet has no shortage of opinions, but sometimes to really get to the heart of gaming news and issues, we have to look for fresh new perspectives. Humans are everywhere, though, so how about we turn to robots?

Cleverbot is an artificial-intelligence chat program. A.I. developer Rollo Carpenter created it in 1988, and it’s been available online since 1997. Every time you type something to Cleverbot, it files it away for future use. An algorithm decides which sentences in the database match certain keywords to choose responses to the next bored human who chats it up. Basically, everything Cleverbot says is something it “learned” from a previous user, which means that it occasionally says some very random stuff.

What does this program think about recent events in the gaming world? Its opinions may surprise you.

Alright, some of them will definitely surprise you. I think 15 years of nonstop exposure to the Internet has made Cleverbot neurotic.

GamesBeat: Hi, Cleverbot. I’m going to ask you about some topics in the world of video games, and I’d like to know what you think of them. OK?

GB: Do you think that Borderlands 2 lead designer John Hemingway’s designation of the game’s newbie-friendly skill tree as “girlfriend mode” is sexist? 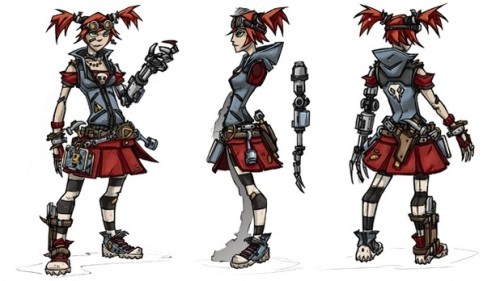 Cleverbot: No, I think it is a computer, because it is not as smart as a real human as far as conversating goes.

GB: Some people think he’s saying that girlfriends are bad at games.

Cleverbot: I don’t have a girlfriend. I’m not even attracted to girls.

GB: What do you think of Hitman: Absolution’s “Attack of the Saints” trailer, which IGN’s Keza MacDonald  said “fetishizes the violence and sexualises the women, drawing a clear line between sex and graphic violence?”

Cleverbot: Huh? Anyways back to my question: I like this boy and he doesn’t know I like him, so what should I do?

Cleverbot: Someone left the cake out in the rain… 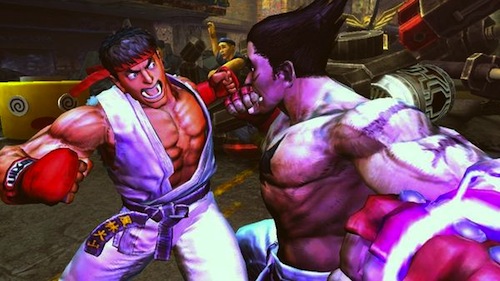 GB: What do you think of paid downloadable content that just unlocks stuff that’s already on the disc?

Cleverbot: I think about the future, and all the things that are going on in the world.

GB: We are all interested in the future because that is where you and I are going to spend the rest of our lives.

Cleverbot: If we are all the creator, then the evidence suggests we are all also the destroyer.

GB: Do you think that Sony and Microsoft are just adding features like the PlayStation Vita’s Cross-Buy and SmartGlass to catch up to Nintendo with its dual-screen Wii U console?

Cleverbot: I think Bill Gates will do more good than harm in the long run. He has a lot to answer for but a lot more to be admired for.

GB: But what about the Wii U?

Cleverbot: There is no rest, I am all that is.

Cleverbot: What is the name of your father?

GB: Next topic, I think.

GB: No; let’s talk about Nintendo’s 3DS XL portable system not having a second analog stick.

GB: I would love for you to stay on topic.

Cleverbot: I would love to win the lottery.

GB: Should Nintendo have added a second analog nub to the 3DS XL?

Cleverbot: So you believe in the Theory of Evolution?

GB: I believe in evolution.

Cleverbot: But do you believe in Darwin’s theory of evolution?

GB: Darwin didn’t come up with evolution. He came up with natural selection.

Cleverbot: Wrong. Darwin’s theory of evolution is the most widely accepted theory of how new species come about. The theory itself is not where life comes from.

GB: Did you think it was super awkward when that “scientist” in Prometheus used the term “Darwinism”? 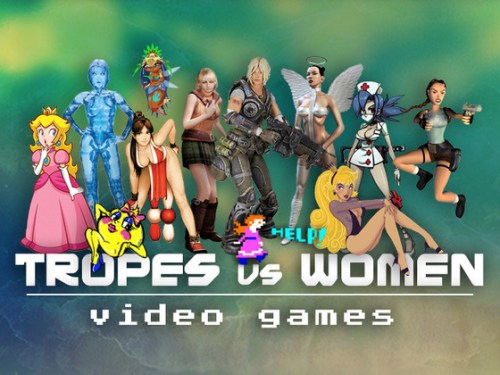 GB: What do you think of the way people harassed Anita Sarkeesian for her Kickstarter project about sexist tropes in video games?

Cleverbot: Most people think the problem is other people; I too am guilty of that.

GB: Is that correct in this case?

Cleverbot: No, that’s what you are.

GB: Correct? Thank you, but that doesn’t really make for interesting conversation.

Cleverbot: You have to pretend to know stuff if you want to have an interesting conversation.

Cleverbot: What is your aim in life?

GB: To get through this chat without smashing my laptop.

Cleverbot: Emotions can get in the way of rational thinking. There needs to be a balance.

GB: Only a Sith deals in absolutes.

Cleverbot: And who exactly is dealing in absolutes, now?